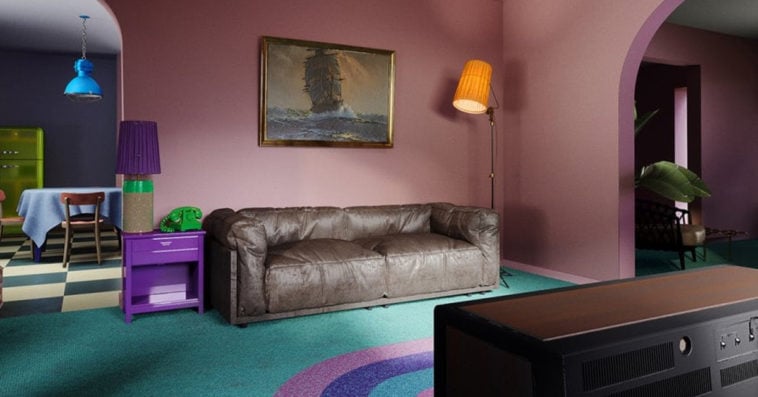 Have you ever wondered what the Simpsons’ house would look like in real life? Well, wonder no more, as our friends from NeoMam Studios have created realistic 3D renders of the most iconic rooms of the fictional residence. And since the Fox animated sitcom is turning 30 this December, NeoMam Studios, with the help of interior designer Pat McNulty, has also taken the liberty to redesign each room based on 2019’s hottest interior design trends.

While NeoMam Studios kept the rose-colored walls of the living room, it replaced the family’s box-type television set with a flat-screen TV, and the overused leather sofa with a sharp blue velvet couch.

The original The Simpsons’ kitchen is mostly furnished with bright-colored fixtures and appliances like the family’s apple green refrigerator, azure pendant lamp, and peach and violet cabinets. Though it sure looks warm and cozy, everyone would agree that it’s a little bit behind time. So in order to catch up with technology while also being stylish, NeoMam Studios recreated the kitchen with the smart home style in mind.

Though the redesigned kitchen features fewer colors, its digital backsplash allows the Simpsons to pick a screensaver that would basically paint a significant portion of the room. In addition to giving color to the space, the digital backsplash also offers day-to-day assistance to the homeowners like relaying a video feed of who’s at the front door, taking down shopping lists, and playing cooking shows from YouTube.

Though the Simpsons’ original bathroom looks neat and cute with its blue-tiled walls and turquoise toilet bowl, sink, and bathtub, its style is far from what is currently popular today. So in order to update the family’s bathroom into a Scandinavian-style bathroom, NeoMam Studios gave it a makeover that boasts natural textures like relaxing whites and stone-grays to reflect the daylight.

The redesigned bathroom is also furnished with sculptural forms of rattan and wicker as well as baskets that keep the space clutter-free.

NeoMam Studios also installed a widescreen TV in the room so Homer doesn’t need to go to the living room to watch his favorite shows. Potted indoor plants and abstract wall art were also added inside the room, completing the industrial look.

Lisa’s original bedroom looks a lot like a smaller version of her parents’ vivid bedroom. Though it looks sophisticated, the room’s combination of solid vibrant colors is not that relaxing to the eyes. To give her room a more comforting look, NeoMam Studios decided to redesign it à la Biophilia style.

Lisa’s updated room features desk and chair that are made from reclaimed wood, green walls of living moss and plants that clean the air, and big windows that provide natural light to the room.

Though Bart’s original bedroom looks nice, it’s pretty obvious that it lacks personality. So in order to give it a character that truly pops up, NeoMam Studios reimagined the room using the elements of the Memphis Design style.

As part of the makeover, the room’s wishy-washy pastel shades were replaced with a bold Memphis palette balanced against black and gray geometrics such as angular desks and chairs. Additionally, Bart’s random movie posters were also replaced with ‘80s Pop Art prints that are screaming for attention.

Like most rooms of The Simpsons’ home, Maggie’s nursery also has pink walls. Though pink is typically associated with girls, NeoMam Studios decided to replace it with something that is gender-neutral. Though Maggie’s updated room looks plainer than the original, Maggie’s toys add a splash of color to the room.