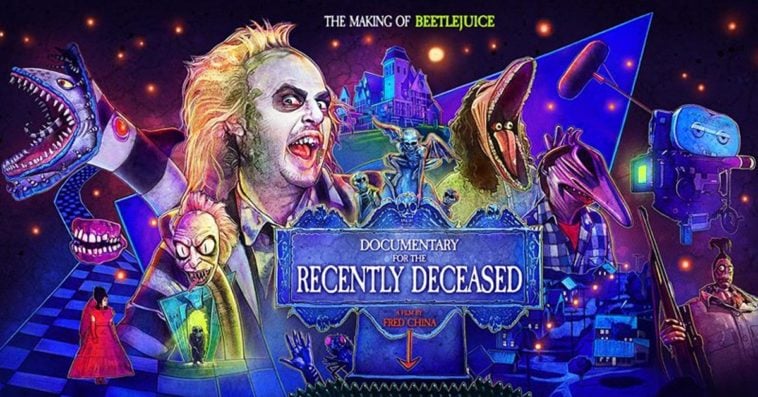 Production on the very first documentary about Tim Burton’s Beetlejuice is currently underway, but the people behind the project need more funding to complete the feature-length film.

Officially titled as Documentary for the Recently Deceased: The Making of Beetlejuice, the movie will feature interviews with the cast and crew of the 1988 movie, and will show behind-the-scenes photos and videos as well as rare production archives such as concept art and blueprints.

French filmmaker and huge Beetlejuice fan Fred China, who serves as the director of the documentary, raised $28,854 for the movie in August 2017 through the project’s first crowdfunding campaign via Indiegogo. China and his team, which includes producers Adam F. Goldberg (The Goldbergs) and Lee Leshen (Back in Time, Ghostheads), used the money to conduct the first batch of interviews for the documentary. Snippets of the said interviews are featured in the second teaser for the film.

But because the Beetle-Team needs to interview more people for the documentary, China launched a new crowdfunding campaign on Kickstarter that would hopefully finance their travel expenses, post-production costs, and other miscellaneous fees.

As of writing, the Kickstarter campaign still needs more than $35,000 contribution to reach its $57,000 goal before the January 6th, 2019 deadline. Backers will get a wide variety of rewards like Beetlejuice bookmarks, pop-up cards, tote bags, shirts, pins, mugs, and posters designed by Stranger Things illustration Kyle Lambert. Other rewards include DVD and Blu-ray copies of the documentary, an associate producer credit in the film, and Goldbergs memorabilia.

READ  15 Avengers: Infinity War Easter eggs you may have missed

Though the Beetle-Team has yet to set a release date for the documentary, they’re hoping to finalize the project in early 2020.