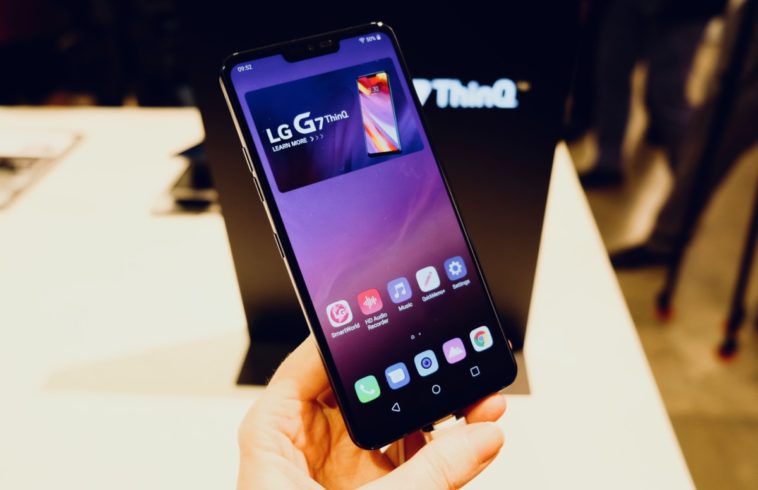 The LG G7 ThinQ has finally been unveiled and the rumors and leaks have been pretty much spot on. To that effect, the new LG G7 ThinQ sports a dual camera, glass back and a nearly bezel-less display with a notch that can be hidden. The display itself is a 6.1-inch QHD+ FullVision LCD display with an 18:9 aspect ratio, but what is especially impressive here is that the display can max out at a 1000 nit brightness level, making it truly good enough to use in direct sunlight.

First, let’s focus on the notch. With the LG G7 ThinQ you can choose to use or lose the notch on the display. Take that Apple! LG calls this the “ new second screen”. We briefly tried switching between having the notch on, and the notch switched off – the notch’s settings can easily be accessed from within the display settings.

The phone is heavily focused on AI, hence the “ThinQ” in its name. AI comes to play in a couple of key areas. Similarly to Huawei’s latest phones, the AI cam on the LG G7 ThinQ can recognize whether the camera is pointed at a person, dog, etc. It will analyze the subject in the frame and recommend the best settings for it. For example, it will tell recommend using a filter, certain exposure, or to use a wide angle. This is designed to take the guesswork out of taking great shots. LG has also integrated AI with Google Assistant so that Google Assistant on the LG G7 ThinQ can perform 32 LG custom device tasks. But we’ll need to explore this feature more when we test the device.

Other notable features include a Boombox Speaker feature which promises speakers that are louder than most typical smartphones, and far-field voice recognition which allows the G7’s AI system to hear you from further away in the room. Most phones can only pick up commands from 6 feet away.

Under the hood, the phone is powered by Qualcomm’s most powerful chipset, the Snapdragon 845, along with 4GB of RAM. The rear camera uses dual 16MP cameras, and we have really high hopes for these since LG has a great track record with optics, especially when it comes to low light. As a matter of fact, LG says that the G7 ThinQ produces photos and videos that are 4x brighter than previous G series devices.

We don’t have pricing or a release date for the LG G7 ThinQ just yet but we do know that LG is offering a free 2nd-year warranty upon registration, which is definitely not the industry norm and something we’d love to see more of. They are also promising to offer continuous upgrades for the device, and that these software upgrades will bring new features to the device, helping ensure that phone owners aren’t forced to buy a new phone due to lack of software updates.

We’ll have an in-depth review of the LG G7 ThinQ up soon.