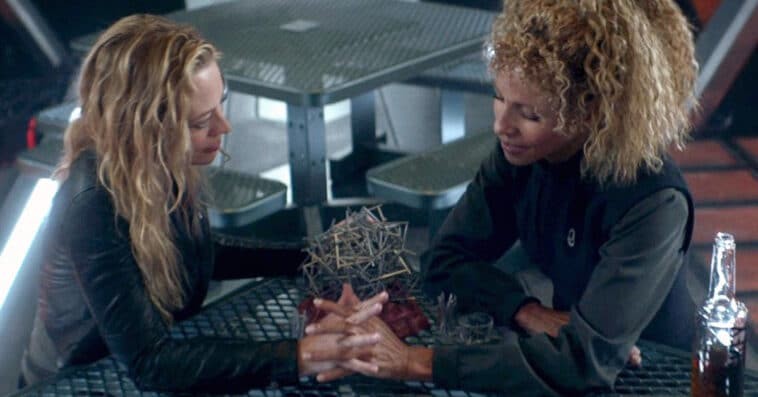 Trekkies are going to see a real modern relationship between Raffi and Seven in Star Trek: Picard season 2.

In a recent interview with ComicBook.com, series stars Michelle Hurd and Jeri Ryan teased what fans can expect from the romance between their characters Raffi and Seven in the upcoming sophomore run of the sci-fi series.

“What I really appreciate about what the creators had decided to tell of our story is that you have these two incredibly stubborn, determined, driven, independent, somewhat sometimes socially awkward women, fully grown women, who are attracted to each other, who see someone, almost like they see the same kind of strength and vulnerability in each other and they’re drawn to each other that way,” Hurd said. “There’s absolutely love and respect and all of that. But there’s also an understanding that when you are at a certain time in your life, and you have lived some big events in your life and figured out how to navigate them and that you found that safety of yourself sometimes is the most secure, it’s sometimes hard to blend that.”

Hurd added that she was “really happy” that the writers didn’t take the “white picket fence” route in telling Raffi and Seven’s relationship story.

“Raffi knows that Seven is an amazingly powerful individual and that she has a big journey that she wants to do, she wants to help the right the wrongs of the universe and she doesn’t want to stand in the way,” Hurd said of how Raffi shows her respect to Seven. “She loves her that much, that she doesn’t want to stand in her way that way. And I really appreciated that in the storytelling and these two women respect each other, and they care about each other incredibly deeply, so much so that they allow each other to do what each other needs to be happy.”

Ryan shared the same sentiments with Hurd, saying, “I think the worst thing that they could have done in writing this relationship is the white picket fence, ‘happy, happy, joy, joy, oh, they’re married, and this is sweet,’ because that’s not who they are, either one of them, it’s just not.”

The start of Raffi and Seven’s relationship

Raffi and Seven’s romance was first hinted at in the concluding moments of Star Trek: Picard season 1 finale, where Raffi and Seven were seen holding hands while staring at each other. While it’s not clear when exactly they fell in love with each other, Hurd and Ryan confirmed that their characters are queer soon after the show’s season 1 finale.

Without labeling Raffi and Seven’s sexual orientation, Hurd told Entertainment Tonight back in March 2020, that she would love to see the show “be able to … effortlessly reveal a non-labeling sexuality for everyone.”  “Wouldn’t it be lovely?” she continued. “Wouldn’t it be great if we could somehow really bring that into these stories, embrace it and not label it, not make it taboo, but empower it? Make it almost fluid.”

Hurd, meanwhile, confirmed that Seven is a member of the LGBTQ+ community by replying rainbow flags to a couple of Trekkies on Twitter at that time.

Ryan revealed to ComicBook.com that Raffi and Seven have already gone past the “honeymoon phase” of their relationship when Star Trek: Picard returns for its sophomore run, as some time has passed between the show’s first and second seasons.

“There’s a big time jump – it’s about a year-ish — from season 1, that you saw the very, very glimmer of the beginnings of this relationship, and then the audiobook is the very early stages and takes it from that point,” said Ryan, referring to the Star Trek: Picard audio drama No Man’s Land. “Now [in season 2] we’ve jumped ahead and where this is a relationship fully in the trenches of day to day life and how do you make this work when they are so independent and they are so strong-willed and stubborn and pigheaded in some ways, as Michell said. These are two mature women who have their fully established lives, so how do you and how much are you willing to you blend and bring someone else in? And that requires a lot of vulnerability that I think will maybe not be so easy, especially for Seven, but for both of these characters in a way.”