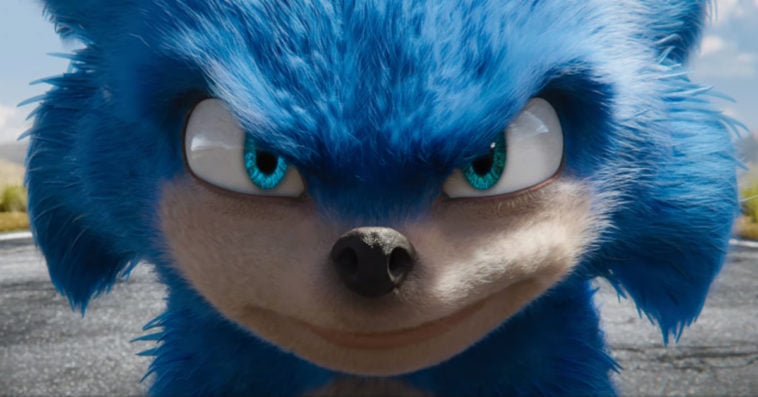 Paramount Pictures has dropped the first official trailer for its upcoming live-action Sonic the Hedgehog movie.

The nearly three-minute clip opens with Sonic (voiced by Ben Schwartz) flashing past Sheriff Tom Wachowski’s (James Marsden) cop car. According to the sheriff’s radar gun, the blue hedgehog is moving at 760 mph — a figure that is way over the speed limit. Shocked by what he just saw, Wachowski gets out of the vehicle to investigate and finds one of Sonic’s prickly spikes buzzing with a current of electricity.

After giving fans a glimpse at the titular character’s hideout, the trailer reveals Sonic’s face for the first time. As part of his apparent training, Sonic runs again. But this time, he’s so fast that he knocked down the power across the Pacific Northwest. Clueless about what exactly they’re dealing with, the country’s Department of Defense reluctantly hires the expertise of Dr. Ivo Robotnik aka Dr. Eggman (Jim Carrey).

Meanwhile, Sonic finds an ally in Wachowski, who seemingly agrees to help the hedgehog after learning that he is on Earth to save it. While the trailer doesn’t explain why Earth needs saving, Dr. Robotnik’s mad ways to catch Sonic will definitely make the hedgehog’s ultimate mission harder to accomplish.

Though the video is generally pretty good, lots of fans are actually not happy with Sonic’s appearance in the movie, including his human-like body, human teeth, and little eyes.

I’d be more accepting of Sonic’s face and voice if his body didn’t make me feel like I was watching a naked man who altered his DNA to become the God of furries show me his butthole.

Like why is he basically late stage Penders Sonic?

Ok, seriously, could be great… but Sonic’s design deserves the Golden Raspberry. He looks like a guy in a fur pyjamas with a CGI head. No exaggeration. He’s too human.

Movie looks good but Jesus Christ why does sonic look like that pic.twitter.com/VMRbNkMAVk

As a matter of fact, some fans were so disturbed by Sonic’s look that they took the liberty to show the producers of the film how the character should look like in the movie.

The movie looks great apart from Sonic …. human teeth and where did you get the idea for the design? He should look like the right side character and not the left. Human teeth … come on now #SonicMovie pic.twitter.com/vrzBlq4Xic

Despite the tons of criticisms, there are still some people who are hopeful about the movie and looking forward to seeing it.

Hopes for the Sonic cinematic future. Fingers crossed ?
Hopefully enough people see this one to where there will be a sequel

Yeah he’s different from his game and cartoon formats. But I don’t think he’s bad. I think he fits more in a live action like this. I can’t wait for it tbh.

At least Jim Carrey is good

Jim Carry does fit the role as Robotnik though! I really do like his character