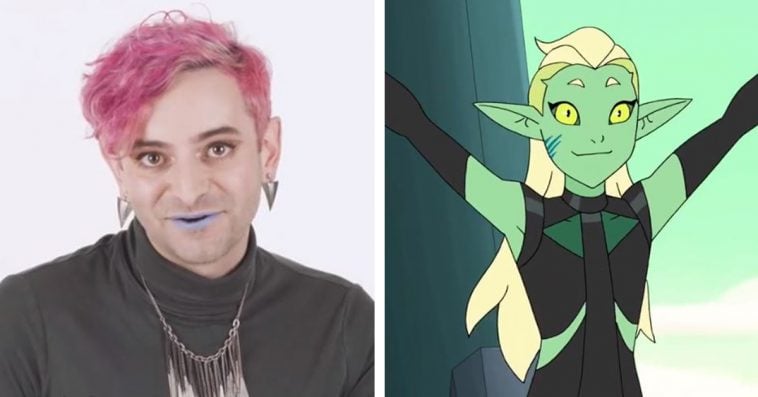 She-Ra and the Princesses of Power is expanding its LGBT representation in its upcoming fourth season on Netflix.

“Double is a non-binary, shape-shifting mercenary, so functionally, I’m playing myself,” Tobia said in an Instagram video announcing the casting.

A recurring character, Double Trouble has the soul of a thespian. They spend hours in “character study” to perfectly copy their target. They also look for feedback on their “performance” all the time even though they don’t handle negative criticisms very well. Coming from Crimson Waste, Double Trouble joins forces with Catra (AJ Michalka) and The Horde.

“Fantasy has always been so vital to me because as a non-binary person, it’s a way of escaping the confines of the world we live in,” Tobia added in an Instagram video. “It’s the way of building other realities and imagining the world as it could be, not as it is. Having non-binary representation in animated shows for young folks is just so vital because young people today are already understanding that gender is diverse and a broad spectrum from a super early age. It’s about time that the shows that we’re making for young people reflect the world as they understand it.”

Beyond excited to announce my first ever television role as the voice of DOUBLE TROUBLE on Season 4 of She-Ra and the Princesses of Power on @netflix!!! Double Trouble is a nonbinary, reptilian, shapeshifting mercenary which is fabulous because that means I’m just playing myself 😘🦎 Thank you to the whole team at @dreamworksshera, @dreamworks, and @nxonnetflix for this once in a lifetime opportunity to bring a recurring nonbinary character to kids/young adult television — it’s so important for nonbinary and gender nonconforming kiddos like me to feel like we’re part of the story too 🌺 Plus a special shout-out to @gingerhazing for being the best queer creator in the universe and to @iamaj (aka Catra) for being the most lovely scene partner this nonbinary elf could ever want 🌸 Season 4 premieres on November 5th on @netflix !!! Can’t wait for y’all to meet Double Trouble — they’re devious and cute and fabulous and i think y’all are gonna love them 💚💚💚

Double Trouble is the first ever television role for Tobia, whose writing has been featured in popular publications like The Huffington Post, Buzzfeed, The New York Times, The Guardian, and Time Magazine. Earlier this year, Tobia’s first memoir, Sissy: A Coming-of-Gender Story, has been published.

She-Ra and the Princesses of Power’s LGBT representation has been lauded by fans and critics since Season 1. In fact, the series earned a nomination at the GLAAD Media Awards this year.

In its freshman run, the series showed a romantic relationship between Spinnerella (Noelle Stevenson) and Netossa (Krystal Joy Brown), not to mention the undercurrents of romantic tension between Adora (Aimee Carrero) and Catra. In the sophomore run, Bow’s (Marcus Scribner) gay dads Lance (Regi Davis) and George (Chris Jai Alex) made an appearance. And lastly, in the third season, Huntara (Geena Davis) flirted with a female bartender, and Scorpia’s (Lauren Ash) unrequited love for Catra was a recurring theme.

She-Ra and the Princesses of Power Season 4 will be available to stream on Netflix starting November 5th.