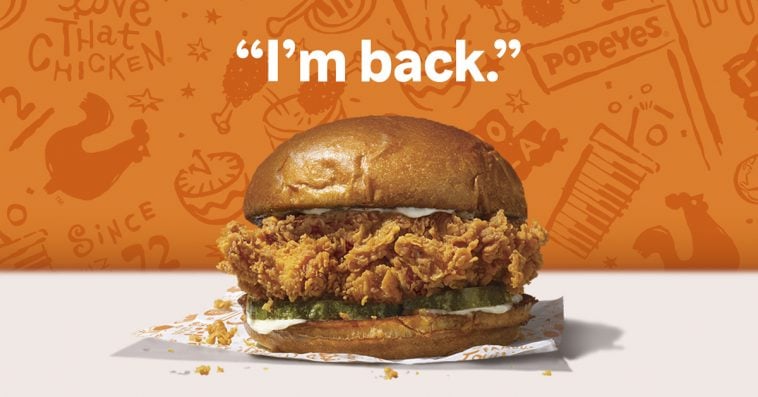 Popeyes’ highly sought after chicken sandwich has finally returned, and if you thought that the craze surrounding it would die down following its two-month hiatus, then you’re definitely wrong.

Popeyes’ chicken sandwich was officially re-launched on Sunday in line with the celebration of the National Sandwich Day. And even though some franchise owners hired additional staff members ahead of the sandwich’s return to the menu, it seemed that a lot of Popeyes locations still had a hard time handling the huge number of customers that patiently fell in line to get a taste of the popular sandwich.

Based on photos and videos shared on Twitter, the lines in both the drive-thru lane and on foot in some Popeyes locations were so long that they extended into the street. A customer even said that the ridiculously long lines looked like “Armageddon.”

They not playing with Popeyes bout that chicken sandwich 😂😂 #savannahga pic.twitter.com/2H052UiVYH

Live report from husband, who is sitting in neighborhood Popeyes drive-thru: "It looks like Armageddon."

The day one line is super long for the Popeye’s Chicken Sandwich on National Sandwich Day! @PopeyesChicken #NationalSandwichDay #PopeyesChickenSandwich pic.twitter.com/pUOQlEyf9a

Waiting times varied by location, some tweeted that they waited in line for about 2 hours; others for more than 5 hours; and a few customers for 8 hours.

Finally eating the Popeyes chicken sandwich after waiting in line for 2 hours pic.twitter.com/0M674B9JwI

y’all went and waited in line for 5+ hours for a popeyes chicken sandwich. we ain’t forget

Just waited 8.5 hours for Popeyes chicken sandwich and DAMN!! Worth it!! Chicken AND bread- not sold separate and I had a cup of water too (FREE). FOODIE WIN!! #ftw Going back to ask about seczchuan sauce again

READ  Honor View20 users are getting an exclusive Fortnite skin

And though some fans have noticed that Popeyes’ chicken sandwich is a bit smaller than the original version first released in August, many customers tweeted that braving the long lines for several minutes or hours was worth it.

Y’all, this damn #popeyes chicken sandwich is so damn GOOD! It was worth the wait @PopeyesChicken. Good LORD!! pic.twitter.com/cjEZh7HbwA

After waiting 35 mins for the Popeyes chicken sandwich I can say that the wait was worth it! It lived up to its hype! pic.twitter.com/6aCpiRF3tr

Though it’s clear that the craze over Popeyes’ chicken sandwich has picked up where it left off, reports said that there’s no sign of selling out yet. “We plan to offer it to our guests for a long time,” a Popeye’s representative told CNN last week, announcing the sandwich’s return. “We are confident that we’ll be able to meet the demand.”