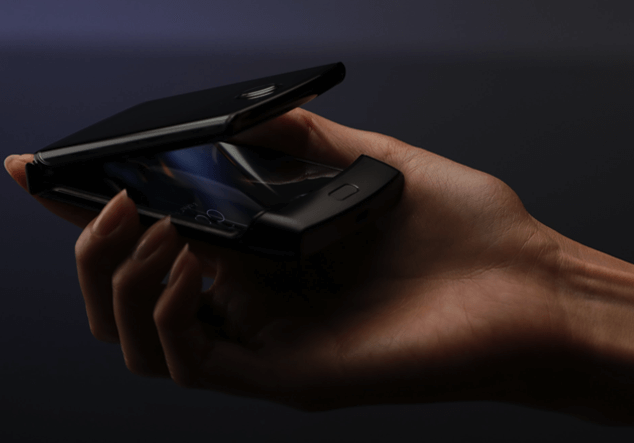 The clamshell design is seemingly making a comeback. Just recently Samsung teased a clamshell design of their own and now Motorola is bringing back a revamped, modernized version of the most iconic clamshell phone of the 2000s, the Motorola RAZR.

The RAZR’s 2019 launch was reported earlier this year and just recently a series of photos of the upcoming RAZR smartphone were leaked Evan Blass on Twitter. The photos give a preview of the device from a number of angles. This leak comes just 2 weeks before its official announcement date on November 13th.

The photos show that the phone is just about palm-sized when folded with a touch screen sitting on its lid on the front, along with a front-facing camera. At the base of the device is what may possibly the phone’s home button or even a physical fingerprint scanner. This could also simply function as a mechanical lock for the flip phone.

Once expanded, the RAZR presents a full, seamless touch screen that can be used either horizontally or vertically, so yes, it’s a foldable smartphone.

XDA-developers was able to obtain additional internal and external specifications. According to the article, the RAZR will have a 6.2 inch OLED screen while the aforementioned outside screen will have a limited resolution of 600×800 with no mention of exact screen size. It will supposedly be powered by the Snapdragon 710 chipset which supports Qualcomm Quick Charge 4+. This hints at the RAZR’s fast-charging capability and that it might carry Motorola’s 27W TurboPower charging similar to the Moto G7 Plus. In regards to RAM and storage, there might be two variants. There will supposedly be a 4GB and 6GB options for RAM and 64GB and 128GB for storage.

Pricing is one of the aspects of the RAZR that are still unclear though a Wall Street Journal report suggests that it could cost as much as $1,500. Official details and specifications of the RAZR will be announced during its official launch this month.