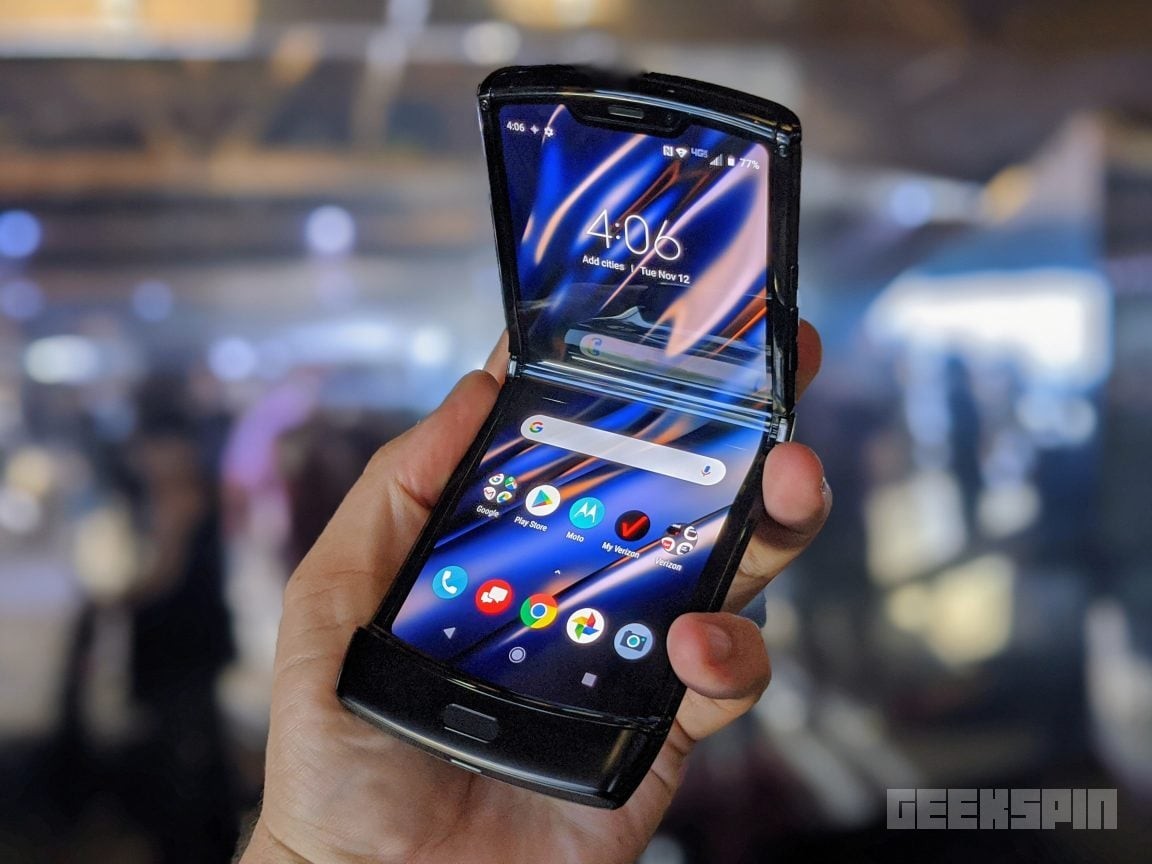 The Moto Razr is back and it’s awesome! I just spent some time with the folding flip phone in Los Angeles, and here are my first impressions…

First, what is it? The new Razr is a reinterpretation of Moto’s groundbreaking and wildly popular flip phone from 2004 — the Razr v3 — for the modern smartphone age. At the core, it’s a folding Android handset. But unlike Samsung’s Galaxy Fold, which opens book-like into a tablet-sized device, the new Razr is a small clamshell device that turns into a full-size phone with a 6.2-inch display.

Folded up in your pocket, it’s only 14mm thick, and about 2/3 as wide and half as tall as your typical smartphone. Open it up, and it’s about the same height as a modern handset, but 2/3 the width. If you want a better comparison, it’s almost exactly the same size as Sony’s new Xperia 5. Moto didn’t share exact dimensions, but check out the gallery below for a size comparison. And like the Xperia 5, the new Razr features an ultra-wide 21:9 screen.

Another nod to the original Razr is the new phone’s signature “chin”, which houses the USB Type-C connector (with 18W fast charge), fingerprint sensor, speaker cavity, along with a bunch of antennae — but no headphone jack. Like its predecessor, the new Razr packs an external display for notifications, but it’s now a larger 2.7-inch 800×600 glass OLED touch screen, and it can do a lot more, like become a viewfinder for selfies.

To make the folding magic possible, Moto used a bespoke, flexible, plastic OLED panel with a resolution of 2142×876 pixels and a super clever hinge mechanism that supports the display while it’s open, but lets it curve gently into the hinge (and partially slide into the chin) when closed. What’s truly remarkable, however, is that this hinge mechanism is sealed, and designed to expel any dust as the phone is opened. In fact, Moto claims the new Razr is splash resistant, which is no small feat for a folding handset. 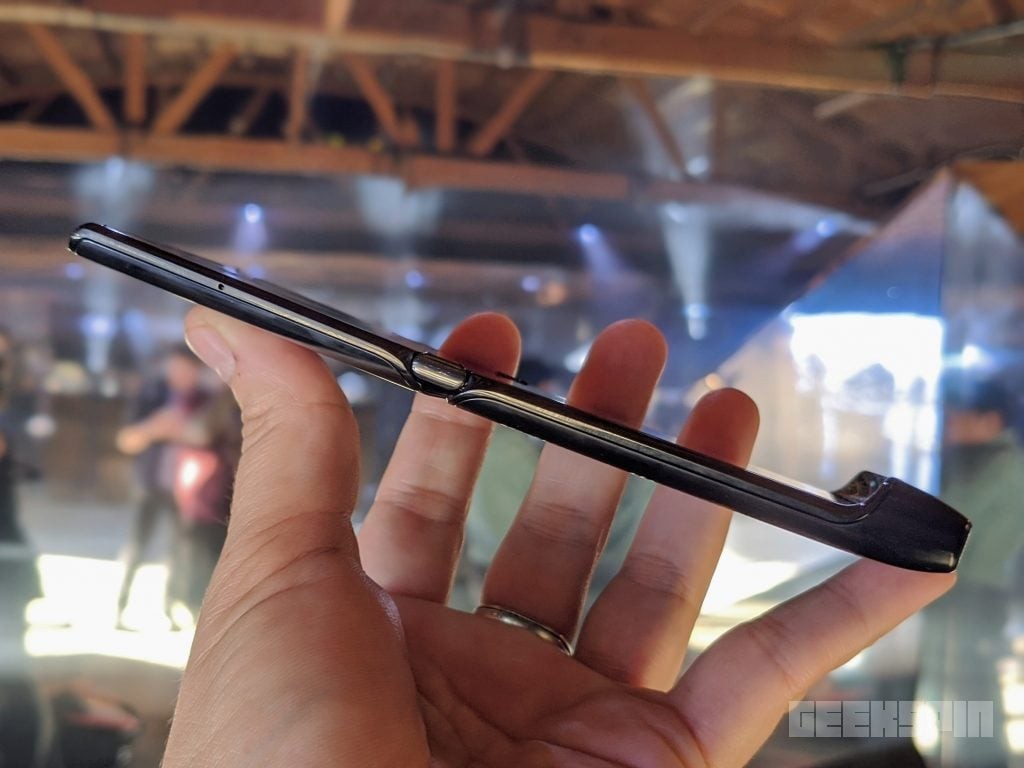 Combined with a strong stainless steel frame, this unique hinge mechanism makes the new Razr feel extremely well built and super durable. It basically “stretches” the screen to be perfectly flat when open, minimizing the kind of unsightly fold lines visible on the Galaxy Fold’s display. The hinge also gives the new Razr that wonderfully satisfying tactile spring-loaded experience of opening and closing a flip phone. Remember that?

The rest of the phone is made of glass (covering the front) and textured resin (plastic – for the back and chin). You’ll find a ho-hum 16MP f/1.7 main camera (without OIS) in front, below the external display, and a 5MP shooter alongside the earpiece in a small notch at the top edge of the main screen. But don’t expect to find a SIM or micro-SD card slot anywhere — the new Razr has neither, and relies on an eSIM and 128GB of built-in storage.

Under the hood, the new Razr is powered by Qualcomm’s Snapdragon 710 paired with 6GB of RAM. It’s an odd choice of chip considering its successor, the Snapdragon 730, was announced several months ago. There are two batteries on board, one in each half of the clamshell, adding up to 2510mAh. On paper that should be enough to power the new Razr for an entire day, as long as you don’t push it too hard. Still, when you consider how much tech is packed inside this phone, the new Razr is quite an engineering marvel.

The new Razr runs a pretty stock build of Android 9 (Pie) — something pretty typical with Moto devices — but includes some customizations to take advantage of the smaller external display. For example (as I mentioned above), the main camera is available for selfies when the handset is closed, or you can use the more basic shooter when the phone is open. I didn’t really get a chance to explore these features in-depth, but it looks like the company has put a lot of thought into the user experience.

Ultimately, I came away really impressed by the new Razr. Moto’s attention to detail inspires confidence. Between the cool hinge mechanism and the unique scratch-resistant coating on the main screen, it really feels like the company’s figured out how to make a sturdy folding phone. This, combined with a heavy dose of nostalgia, should make this handset a hit — at least for those who can afford the hefty $1499 price tag!

Pre-orders start December 26, 2019, and the new Razr will begin shipping January 9, 2020. In the US, it’s exclusive to Verizon for the time being (subsidized at $62.49 per month for 24 months), but it will also be available unlocked in other markets, like Europe and Asia. Hopefully. I’ll get a review unit soon, so stay tuned for that…