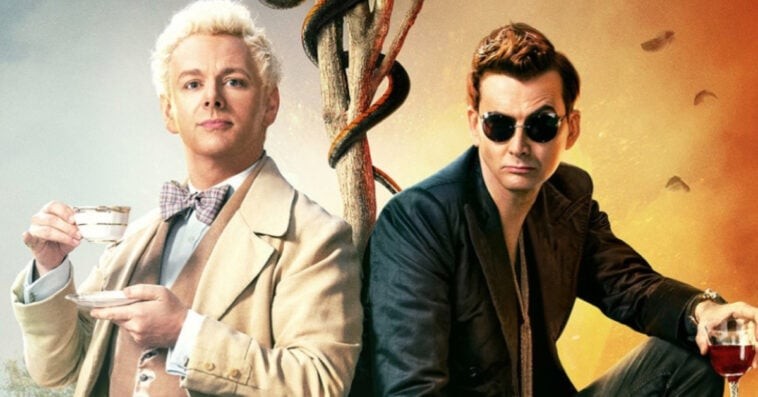 It’s been nearly a year since Amazon Prime Video revealed that it ordered Good Omens season 2. And because the streaming service has yet to set a release date for the show’s sophomore run, a lot of fans have taken to social media to directly ask creator Neil Gaiman about the show’s return.

Overwhelmed by the huge number of fans bluntly asking him to announce a premiere date for season 2, Gaiman threatened to not release the show’s new batch of episodes at all.

“No. And if you ask again like that, we may not release it at all,” Gaiman wrote in a tweet in response to a fan demanding a release date announcement for season 2.

Almost an hour later, Gaiman clarified in a follow-up tweet that he was just joking. “I thought it was funny, and hoped my reply was funny,” read a portion of his tweet. “WE WILL RELEASE GOOD OMENS 2, WHEN IT IS DONE. We only stopped shooting in March. There is much to be done.”

Also, please don't be mean to @conkamarvel123 — I thought it was funny, and hoped my reply was funny. WE WILL RELEASE GOOD OMENS 2, WHEN IT IS DONE. We only stopped shooting in March. There is much to be done.

According to Amazon, season 2 will follow angel Aziraphale (Michael Sheen) and demon Crowley (David Tennant), now living back on Earth in London’s Soho neighborhood, as their easy lives are interrupted by an “unexpected messenger” that leads them into yet another mystery.

Season 1 covers the entirety of Gaiman and Terry Pratchett’s 1990 novel of the same name on which the TV series is based, so season 2 is extra exciting for fans, as Gaiman and Pratchett never wrote a sequel to their beloved book. They, however, did make initial plans for a follow-up several years ago.

“It’s thirty-one years since Good Omens was published, which means it’s thirty-two years since Terry Pratchett and I lay in our respective beds in a Seattle hotel room at a World Fantasy Convention, and plotted the sequel,” Gaiman said in a statement last year. “I got to use bits of the sequel in Good Omens — that’s where our angels came from. Terry’s not here any longer, but when he was, we had talked about what we wanted to do with Good Omens, and where the story went next. And now, thanks to BBC Studios and Amazon, I get to take it there.”

Gaiman also teased the upcoming batch of episodes, saying, “There are so many questions people have asked about what happened next (and also, what happened before) to our favorite Angel and Demon. Here are the answers you’ve been hoping for. We are back in Soho, and all through time and space, solving a mystery, which starts with an angel wandering through Soho, with no memory.”

Aside from Sheen and Tenant, Jon Hamm will also come back for season 2 to reprise his role as Archangel Gabriel. Other returning cast members include Doon Mackichan as Angel Michael and Gloria Obianyo as Uriel, who will be joined by new angels portrayed by Liz Carr (Saraqael) and Quelin Sepulveda (Muriel). Bridgerton star Shelley Connhas has also been cast as a “key character from Hell” next season.

Is there a season 3 of Good Omens?

Amazon Prime Video and BBC Two have yet to renew Good Omens for a third season. The possibility of the series getting a season 3 will largely depend on how well the show’s upcoming season 2 will be received by the viewers. Creator Neil Gaiman, who writes the series, also has a huge say in the fate of the series.

Where to watch Good Omens

An Amazon original series, Good Omens is exclusively available to stream on Amazon Prime Video. The first season of the show is currently streaming on the platform across most regions, including the United States, United Kingdom, Canada, and Australia.

Prime Video is included with an Amazon Prime membership for $14.99 per month or $139 per year. But if you’re not interested in any of Amazon Prime’s other perks, you can sign up for Prime Video on its own for just $8.99 per month. Watch the first season of Good Omens with a Prime Video subscription for as low as $8.99 a month

Is Good Omens on Netflix?

No. Good Omens is not on Netflix. As previously mentioned, the fantasy comedy series is exclusively streaming on Amazon Prime Video.

Are Aziraphale and Crowley in love?

Fans have been shipping Aziraphale and Crowley ever since Gaiman and Terry Pratchett’s Good Omens book was released back in 1990. And the novel’s live-action adaptation has expanded on this even further through the undeniable chemistry shared by the show’s leads, Sheen and Tennant.

While they have yet to verbally express their love for each other, tender moments in the show such as when Aziraphale covers Crowley with one of his wings have led several fans to conclude that the two characters are in love with one another. Even Gaiman himself has confirmed more than once that Aziraphale and Crowley are in love. But Gaiman thinks that labeling the pair gay, bi or even pansexual is not really appropriate, as both characters are ethereal beings, which are canonically sexless in the book unless they purposefully choose one.

I wouldn't exclude the ideas that they are ace, or aromantic, or trans. They are an angel and a demon, not as make humans, per the book. Occult/Ethereal beings don't have sexes, something we tried to reflect in the casting. Whatever Crowley and Aziraphale are, it's a love story.

As mentioned above, angels and demons in Good Omens do not have a gender or a sex unless they deliberately choose one. This has led some fans to assume that Crowley and Aziraphale are genderfluid. Apparently, this is not the case. In a couple of tweets to fans, Gaiman revealed that Crowley’s gender is “Fallen Angel,” while Aziraphale’s gender is “Angel (retired).”

Ethereal beings in Good Omens do not perceive gender in the same way that humans do, so it isn’t surprising that the show’s universe has an entirely unique set of labels for gender.