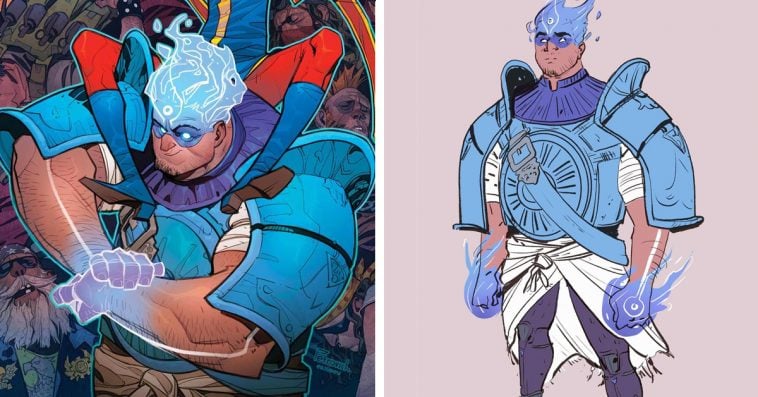 Kamala Khan’s Ms. Marvel is getting a superhero ally this year.

Marvel will introduce the brand new character of Fadi Fadlalah, aka Amulet, in the upcoming Magnificent Ms. Marvel #13.

“Amulet is a fun, mysterious new character,” said Ahmed in a statement to Marvel. “We’re keeping most of the details of him close to our chests, but I can tell you that his powers are magical in nature.”

Over on Instagram, Alfageeh described the new superhero as “a gentle giant with defensive and healing powers that come from a family heirloom.”

As seen in the cover for Magnificent Ms. Marvel #13 and the character design made by Alfageeh, Amulet is a hulking hero with fiery blue hair and glowing hands. He also has a sky blue bulky top armor that matches his hair color.

“The blue and white color palette and the circular design [of Amunet’s look] were pulled from the Nazar, a symbol that pops up all over the Middle East that protects the wearer from the evil eye — the harmful intentions of others,” explained Alfageeh. “[It’s] a bit of a historical, supernatural touch.”

Alfageeh added: “We tend to associate sharp corners and edges with evil, and rounded designs and circles with good. This character is a gentle giant, so I wanted to make sure that even with his size he was shaped like a friend!”

Both Ahmed and Alfageeh have Arab roots, so creating Amunet for Marvel is something that is very close to their hearts.

“This one means a lot to me. Superhero comics helped teach me to read, but as an Arab American kid I never quite saw myself in them. To be able to add a character with a name like mine, that shares my heritage and my hometwon to this pantheon…whew!,” Ahmed wrote in a tweet.

Alfageeh, meanwhile, tweeted: “4 years ago reading Ms. Marvel vol 1 convinced me to become an illustrator. AMULET means so much to me as a nerdy lil Arab kid.”

Written by Ahmed with art by Minkyu Jung, Magnificent Ms. Marvel #13 will go on sale in March 2020.