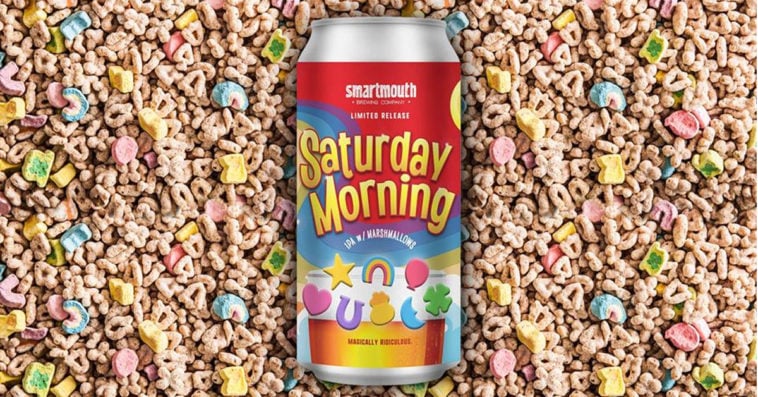 Officially called Saturday Morning, this limited-edition 6.6% ABV (alcohol by volume) IPA is brewed with in-house toasted marshmallows and bulk dehydrated-marshmallow-bits. Hopped and dry-hopped with Galaxy and Calypso hops, this concoction has a slight cereal taste with a pillowy softness. The beer’s smell is sweet and citrus, with orange and pear aromas.

Despite the obvious similarities between the branding of the two products, Saturday Morning is not an official collaboration between Smartmouth and Lucky Charms maker, General Mills. “For more than 50 years, Americans of all ages have loved Lucky Charms and its magical marshmallows. Like you, we learned about this through the media,” a spokesperson for the consumer food manufacturer told Marketwatch when asked if they’re involved in the creation of the new beer.

To mark Saturday Morning’s “very limited” release, cans and draft of the said booze will be available at Smartmouth’s Norfolk headquarters this Saturday, March 2nd, beginning at 12 noon. A limited amount of draft will also be available at the brewer’s Pilot House in Virginia Beach.

Though Smartmouth won’t be shipping Saturday Morning to other states, the beer will be distributed throughout Virginia to limited restaurants, bars, and specialty bottle shops.