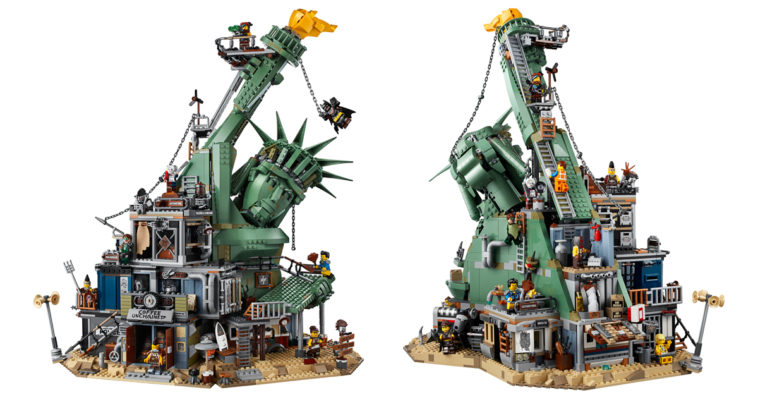 A month before the highly anticipated theatrical release of The Lego Movie 2: The Second Part, LEGO unveiled a new building set inspired by the upcoming movie.

Officially called Welcome to Apocalypseburg, this construction set has an epic 360-degree design, featuring a section of the Statue of Liberty, Scribble Cop’s office, Lucy’s hideout, Fuse’s workshop, a café, an armory, a barber’s and tattoo parlor, a rooftop diner, a gym, a spa, and a lot more.

The café, which is called Coffee Unchained, is furnished with a service counter, cash register, buildable coffee machine, and an outdoor table with a parasol and 2 seats. The rooftop diner, on the other hand, has a buildable V8 engine deep-fat fryer, table, oven, frying pan, and food elements. The gym features a buildable punching bag, while the truck-shaped spa showcases a buildable hot tub and shower.

With over 3,100 pieces, Welcome to Apocalypseburg is the largest LEGO Movie-inspired construction set. It also comes with 12 minifigures, namely Emmet, Lucy, Batman, Scribble Cop, Harley Quinn, Green Lantern, ‘Where are my pants?’ Guy, Larry the Barista, Chainsaw Dave, Mo-Hawk, Roxxi, and Fuse as well as a rat figure. This advanced building set also includes a number of character weapons and other accessories.

Retailing for $299.99, this advanced building set will be available at LEGO brand retail stores and shop.lego.com starting on January 16th.

The Lego Movie 2: The Second Part, which stars the voices of Chris Pratt, Elizabeth Banks, Tiffany Haddish, Will Arnett and more, will hit theaters on February 8th.