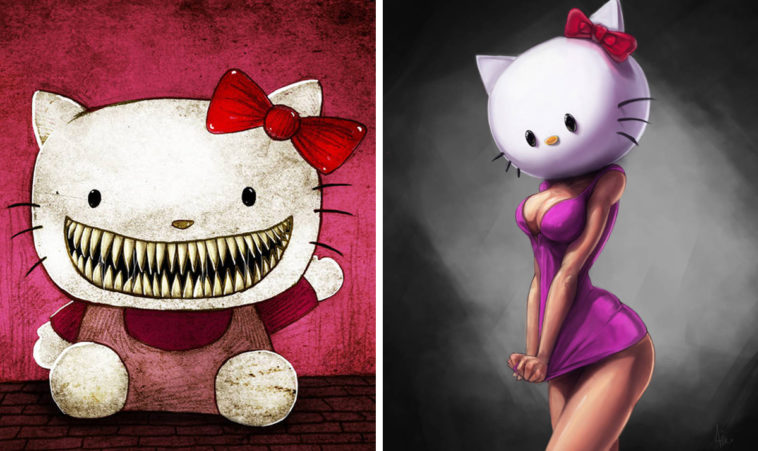 Originally created for preadolescent females, Hello Kitty is typically depicted as a bright, sweet, and kindhearted girl. These admirable traits, plus her cute and innocent look, have made her a global phenomenon, not only among kids but among adults as well. In fact, the most popular Sanrio character has gained a cult-like following among grown-ups, especially in Asia, where cars, jewelry, and many other high-end consumer products are adorned with her likeness.

However, because of Hello Kitty’s rather plain appearance, some fans have begun to find official Hello Kitty merchandise boring and monotonous. So in an effort to make their favorite kawaii character more interesting, artistically-inclined fans have started to reimagine Hello Kitty in a completely new light through different kinds of fan art.

Since Hello Kitty is always portrayed as a perpetual third grader in the mainstream media, lots of Hello Kitty fan art show Kitty White — Hello Kitty’s real name — as an adult. Interestingly, the majority of this type of fan art is very sexy in nature, reimagining Hello Kitty with an enormous bosom, huge butt, and super curvy body.

There is also some fan art that reinterprets Hello Kitty as someone who has an entirely different personality. Examples of those pieces of artwork include emo Hello Kitty, punk Hello Kitty, and gansta Hello Kitty.

And because Hello Kitty has a pretty basic look, she has also become a favorite subject for crossover art.  Some of the pop culture characters that Hello Kitty has been paired with to create a mashup art include Pikachu, Sailor Moon, Mario, Optimus Prime, and Hannibal Lecter, among many others.