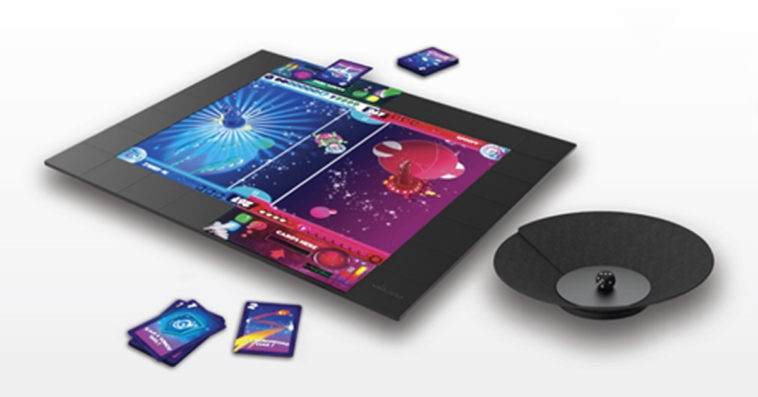 The first-ever board game console has been revealed to the world on January 6th at CES 2019 in Las Vegas.

Officially called SquareOne, this innovative console is created by French startup Wizama, which won a CES Innovation Awards in gaming this year. Conceived out of a father’s discontent of having to fight a tablet just to get his daughter’s attention, SquareOne merges the human experience of playing traditional board games and the game feel of video games into one unique experience.

Families and friends can compete or collaborate on the built-in horizontal 19-inch touchscreen, using connected toys such as pawns, cards, buzzers, and dices. Every movement, effect, and interaction of these toys is calculated and illustrated in real time by the console.

SquareOne’s screen is also bordered with 26 dedicated slots that can be used by cardboard tiles and other connected toys to build specific playing areas and enlarge the gaming surface. The cardboard slots are made of soft grip material that allows real cardboards to be easily positioned around the console. Powered by Bluetooth and NFC technologies, the console also detects every dice roll and its corresponding value.

Available games on release day include Snakes and Ladder-inspired Oya Stones, tactical game of conquest Chromacy, chance game Krubera, 2 vs 2 shooter game Cosmo Squabble, and role-playing game Fistful of Screws. These games can be accessed directly through the console, which also enables players to download new games, record games, restart a match at any time, and set up profiles. With built-in speakers, music can be part of the games as well.

Enhanced with artificial intelligence, the console adapts to the player according to his age and knowledge, and provides interactive tutorials that eliminate the need to read long game rules.

“By combining board game and video game, SquareOne offers family and friends a way to experiment tons of fun and excitement without the generation gap around technology or having to learn a full rulebook,” Franck Botta, CEO of Wizama, said in a statement. “We provide a multigenerational way to play where everyone can interact, immerse, bond, compete, set challenges or cheat!”

In addition to breaking generation gap between players, SquareOne also surpasses intercultural barriers as each player can choose to play in one of the 32 languages available.

Wizama’s SquareOne will be available in early summer of this year at a suggested retail price of $499. The package includes 4 interactive pawns, 54 magic cards, 1 smart dice, 1 wireless dice track, and an AC power adapter.