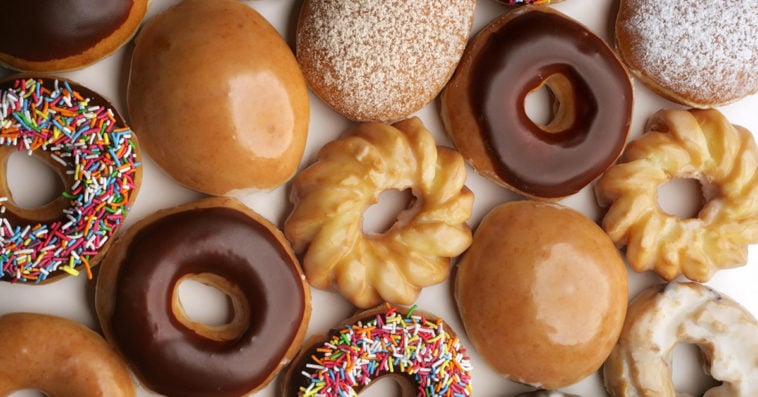 In celebration of the National Donut Day on June 7th, Dunkin’ Donuts and Krispy Kreme are giving away free donuts for everyone on Friday.

Dunkin’ Donuts, which recently removed the word “Donuts” from its name, will offer free classic donuts to its customers with any beverage purchase. Patrons can pick out any classic donut flavor they like, including boston kreme, jelly filled, chocolate glazed, strawberry frosted, and more.

A day for donuts is a day for America! #DunkOut to Dunkin’ and get a FREE donut with any beverage purchase on #NationalDonutDay, June 7th! ? pic.twitter.com/Sjlb52WJNo

Unlike Dunkin’ Donuts, Krispy Kreme will be handing out free donuts without any purchase requirement. According to a rep for Krispy Kreme, guests can visit any of their participating stores across the U.S. and Canada and get one donut off its menu absolutely for free.

Interestingly, if Krispy Kreme manages to give away at least one million of donuts on June 7th, it will unlock another day of free donuts later in the month.

1 MILLION DOUGHNUT GIVEAWAY!
Really!!! Get any FREE doughnut this National Doughnut Day, Friday June 7th! If we make the magic number we'll give away our next new doughnut for free later this month! https://t.co/Zsuu3kFGmR pic.twitter.com/TzM3sZJZQP

Smaller donut houses like Duck Donuts and Maple Donuts will also give away one free donut to each of their customers without any purchase necessary.

Walmart is also joining the celebration. Select stores of the retail giant will offer free donut and coffee samples to their shoppers on the highly anticipated food holiday, which is being observed every first Friday of June each year.

For those who are not familiar, the National Donut Day is created by The Salvation Army in Chicago in 1938 to honor the “Donut Lassies” — the female members of their church who voluntarily served donuts to soldiers on the front lines during World War I.