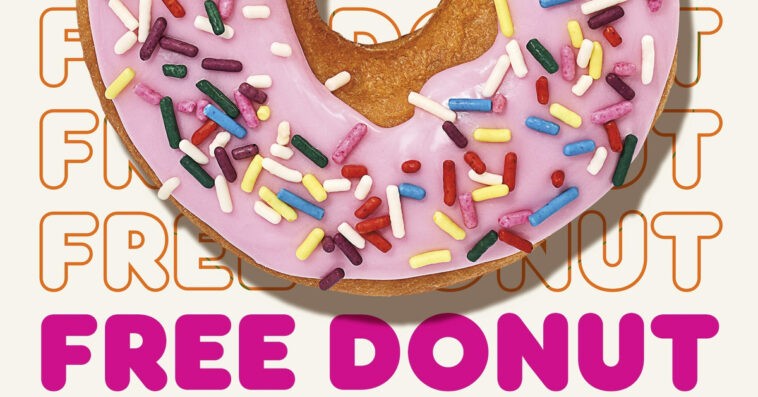 Dunkin’ is celebrating this year’s National Donut Day with a donut giveaway.

How to get free donuts from Dunkin’ on National Donut Day

The coffee and donut company has recently announced that it is giving away a free donut to every customer that will buy any Dunkin’ beverage on National Donut Day, which falls on Friday, June 3rd.

For the free donut, fans can choose frosted, glazed, filled, sprinkled, or whatever they think will pair best with their purchased Dunkin’ sip for the day.

Dunkin’s special offer to ring in the holiday is good all day on National Donut Day at participating Dunkin’ locations, while supplies last.

What is National Donut Day?

National Donut Day is an annual holiday being celebrated every first Friday of June in the U.S., following the fundraising event created by the charitable organization The Salvation Army in Chicago back in 1938 to honor their members who served donuts to soldiers during World War I. The holiday celebrates the donut, and many American donut companies, like Dunkin, offer free donuts during the day.

Dunkin’s National Donut Day celebration follows the company’s inaugural observance of Iced Coffee Day last May 25th. The holiday was created by Dunkin’ to bring joy to kids in hospitals in the U.S.

To mark the holiday’s debut, Dunkin’ and Puma launched a shoe collaboration that saw Puma’s Triple Basketball Sneaker and GV Special Sneaker get the Dunkin’ treatment. To further celebrate the collab on Iced Coffee Day, both companies donated pairs of the PUMA x Dunkin’ sneakers to their hospital partners across the country. Some of the recipients were child life specialists, aka hospital heroes who go above and beyond every day to bring joy to kids in hospitals.