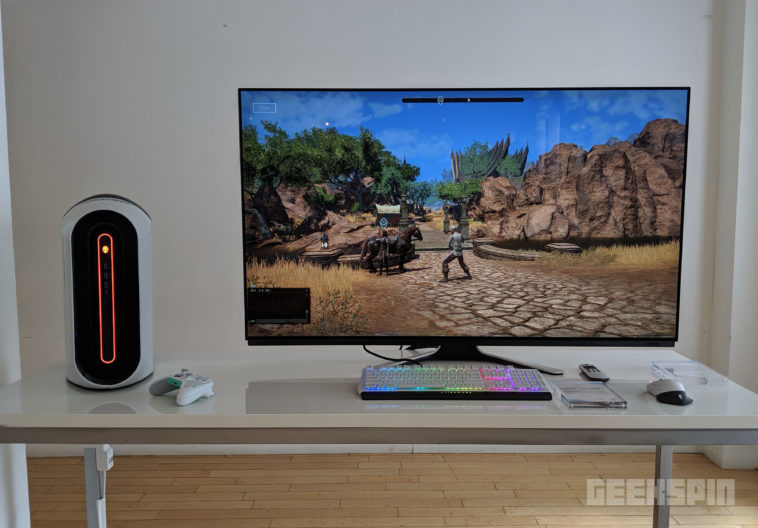 Dell has completely redesigned their Alienware Aurora mid-tower desktop which their busy showing off at Gamescom. The new desktop design is rocking the Alienware’s new Legend industrial design scheme. The new Aurora desktop design is 10% cooler, with more headroom for overclocking, and it supports dual NVIDIA GeForce graphics cards. Powered by 9th Gen Core Processors, the new desktops will be available on August 20th starting at $969.99.

In addition to the new Alienware Aurora desktop, Dell announced the world’s first 55-inch OLED gaming monitor. Back at CES in January, Dell showed off a prototype of the monitor which made headlines, but now their Alienware 55 OLED Gaming Monitor (AW5520QF) has been refined and is ready to be released. The 4K UHD gaming monitor also features Alienware’s new Legend industrial design and it offers a 120Hz variable refresh rate, a response time of 0.5ms, along with AMD Radeon FreeSync technology and built-in speakers. The AW5520QF Gaming Monitor will be available on September 30th starting at $3999.99.

If the new Alienware Aurora is priced too high for your budget, don’t fret, because Dell has come out with a new budget-focused PC in the form of the Dell G5 desktop. This gaming desktop is the first in their new G series. It’s a relatively compact gaming desktop that is upgradable. It can be configured with i9 K Series CPUs, the VR capable NVIDIA GeForce GTX and RTX or the AMD Radeon RX 5700 XT and RX 5700 graphics cards. It also features an optimal cooling design with four thermal mode options. And while its design might not offer the same wow factor as the new Aurora desktop, it can be configured with blue LED lighting and a clear window side panel. The G5 is available today starting at $629.