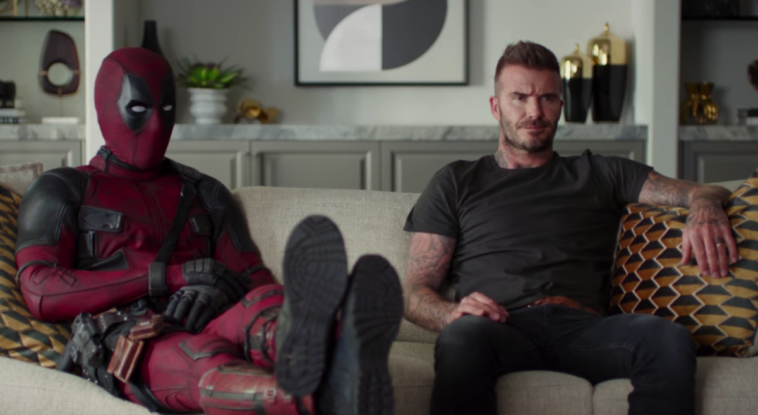 Deadpool is a superhero who ignores a lot of things. For instance, politeness, direct orders from the X-Men and Hugh Jackman’s feelings are just three of those things.

Another thing that Deadpool quite clearly ignores is the fourth wall. This is clearly demonstrated in the new trailer for the movie, which is being released on May 18th.

The new trailer features David Beckham… yes, that David Beckham – the Manchester United, LA Galaxy and Real Madrid legend. The one who scored an amazing last-minute goal against Greece, captained his country and played for many of the world’s biggest soccer clubs.

Oh… he also has a funny voice. Deadpool brought this fact up in the last movie. In one scene, he said “You ever heard David Beckham speak? It’s like he mouth sexed a can of helium.”

It’s a pretty funny scene and one which showed that Beckham is a good sport… if he wasn’t, he probably wouldn’t have let them use his name.

The trailer features Beckham looking at that scene repeatedly when Deadpool arrives at his front door. The resulting interaction shows the red-clad hero trying to make up for that joke he made at the former footballer’s expense.

Of course, there is a twist in the brief trailer, which sees Beckham make more than a few sly digs at Ryan Reynolds, the actor who plays Deadpool.

The 1998 movie, Boltneck, takes a particular bashing. The pair do eventually make-up, in what is both a funny and innovative scene. The lines are actually a little bit blurred – by the end of it, we are not sure if he is talking to Wade Wilson or Ryan Reynolds.

David Leitch directs Deadpool 2 and it looks as though it’s going to be a thrill from start to finish… we’d be very surprised if Beckham makes an appearance though.