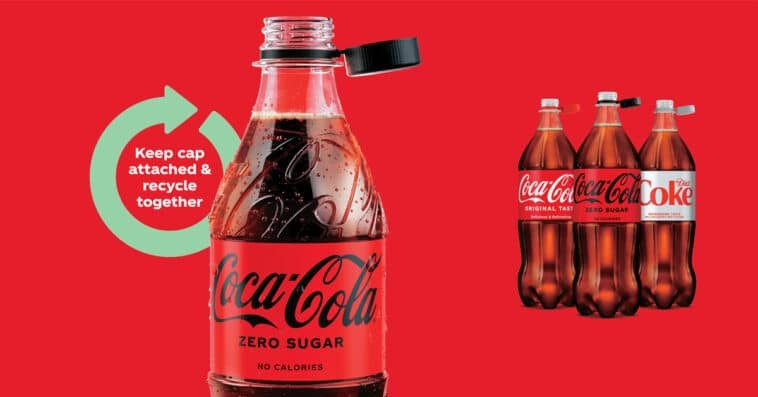 Coca-Cola is well aware that caps of its soda bottles usually end up as trash, so to help solve the problem, the beverage company has come up with a new cap that doesn’t come off.

On Tuesday, Coca-Cola Great Britain announced that it has begun rolling out a new version of its plastic bottles that feature an attached cap ― a packaging design that keeps the cap connected to the bottle after opening, reducing the potential for it to be littered and making it easier for the entire bottle to recycle at once.

Bottles with the new attached caps have already appeared in Scotland this month and will eventually roll out across the U.K. According to a press release, consumers will start to see the new caps attached to 1.5L bottles of Fanta, Coca‑Cola Zero Sugar, and Diet Coke, with the switch set to be completed for all plastic bottles across Coca-Cola Great Britain’ range of brands by early 2024. It’s currently unclear whether the new attached caps will make their way to the U.S.

“This is a small change that we hope will have a big impact, ensuring that when consumers recycle our bottles, no cap gets left behind,” Jon Woods, General Manager at Coca‑Cola Great Britain, said in a statement.

The new attached caps are part of Coca-Cola’s World Without Waste initiative. First announced in 2018, the sustainable packaging campaign aims to collect and recycle the equivalent of one bottle or can for every one sold by 2030, use 100% recycled packaging material by 2025, and use 50% recycled material in bottles and cans by 2030.

Despite Coca-Cola’s eco-friendly efforts, some environmentalists still think that the company isn’t doing enough to protect the environment.

“Whether their plastic caps are tethered or not, the company still produces billions of throwaway plastic bottles every year, harming our environment, our communities and our climate, and impacting our health,” said Graham Forbes, global plastics project lead at Greenpeace USA, according to CNN.

Instead of concentrating on recycling, Coca-Cola is being urged by many environmentalists to switch its focus to reusable containers.

Forbes said that if Coca-Cola truly wants to solve the plastic and climate crisis, the company “must focus on reducing plastic by doubling its reuse and refill packaging target to 50% by 2030.”