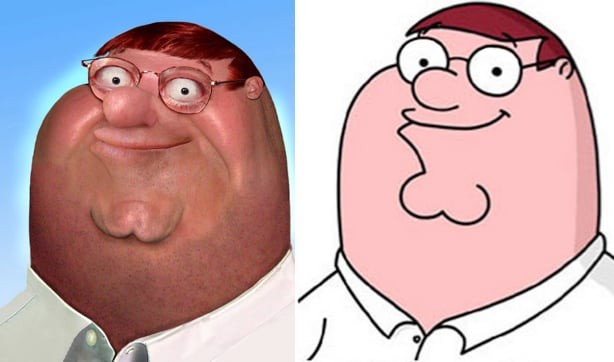 Who hasn’t plopped down on the couch in front of the TV after a long day at school or work just to catch a re-run of Scooby-Doo? I’m sure we can all agree that cartoons are a universal language. But have you ever imagined what your favorite cartoon characters would like like if they were brought to life?

Artists Raoni Nery, Soojong Kim,  MataleoneRJ, Adnan Ali, and  Fabio Vido used their magical powers of imagination to conjure up these famous animations and bring them to life. Prepare to be amazed when you see what these iconic cartoon characters would look like if they lived in our world.

Yabba-dabba-doo! It’s Fred Flintsone! This version of him is so realistic, you can almost literally hear Fred screaming “Wilma!!!”

Charlie Brown is undeniably one of the most beloved household names on the planet. But as a real little boy, he is a lot less adorable.

If Timmy Turner exited in real life, I would advise that you befriend him. Why? Well, he’s got fairy godparents that grant his every wish. That’s why!

This very realistic rendition of the brave space ranger makes him look like he’s ready to battle alien invaders and protect the other toys… I mean humans. To infinity and beyond!

What do you get when you combine an overconfident dude and a mystery solving gang with a talking dog? Well, you get the Johnny Bravo and Scooby Doo crossover! Looks like Johnny’s still stalking Daphne, though. Freddie won’t be too happy about this.

Imagine if someone unleashed real-life Raphael in the city… we’re pretty sure that crime rates would quickly shrink!

Sometimes, it’s easy to forget that Mickey is a mouse. It probably has something to do with the fact that he stands on two legs and wears clothes. Either way, Mickey looks pretty cute both as a cartoon and in reality. But would you join his Mousketeer club if he were real?

Were you conflicted for as to whether Naruto and Sasuke were friends or enemies? For years, we’ve had to settle for the term “frenemies”, but the way they appear to be posing for a selfie here finally answers the question for us.

Piccolo changed for the better when he met Goku and Gohan. That said, I’m sure that most people would have to go through a period of adjustment if Super Nameks and Super Saiyans suddenly popped up on the sidewalk.

Futurama’s Fry was frozen in a cryo-freezer for 1,000 years, explains why the real-life version of him looks like he’s seen better days.

Real-life Mario and Luigi are suited up to rescue Princess Toadstool from the diabolical King Bowser. How crazy would it be to see the Mushroom Kingdom in real life? Just steer clear of Bowser!

This is what Peter Griffin would look like if he worked with you at the office. Why don’t you invite him over for some misadventures?

I wonder if Beavis and Butthead’s satirical and unfiltered commentary towards society would be just as well-received if they were actual living human beings?

#14 The White Rabbit (Alice in Wonderland)

Follow this iconic rabbit down the rabbit hole, and hurry now; because, oh dear, we don’t want to be late for tea with the Mad Hatter!

His majesty, the Ice King, has the ability to create and manipulate snow. He may use his powers for evil on Adventure Time, but maybe we could trick him into fixing global warming.

Badass mutant, Leela, spearheads all aviation services on the Planet Express ship. How would you feel if you saw her in the flesh in all her cyclops glory?

Anyone who’s ever played Dungeons and Dragons knows that the Dungeon Master is quite the majestic storyteller. If he were reimagined as a human being, you could ask him to follow you around and tell you stories throughout the day.

Once upon a time, Porco wasn’t always a pig. He’s actually an Italian World War I veteran, who was turned into a pig via a curse. Now, he works as a bounty hunter and catches air pirates over the Adriatic Sea.

Pinky is a happy-go-lucky type of lab mouse, but not Brain. Nope, Brain is an evil genius who plots to conquer the world every night. Better not let this mouse into our world!

This furry Sesame Street buddy has a lot of love for cookies, which now seems to have escalated into a serious addiction. Just give him his cookies, and nobody gets hurt!

Squidward was never a cheerful dude to begin with, but it looks like someone’s really gotten on his nerves this time! Maybe Patrick broke his clarinet?

A wild Pikachu appeared! Although, it doesn’t look like he wants you to throw a Pokeball at him right now. Better run before he strikes you with a Thunderbolt.

Who knew Stitch had a dark side? Based on this version of the lovable alien, you’d probably guess that he’s part gremlin. Don’t try anything funny, Stitch! Remember, we’re ohana.

He may be creepy, but even in sculpture form, the CEO of Planet Express doesn’t look a day over 160. The future’s looking pretty bright.

Okay, animated Stewie was weird enough. This is just going to haunt us for a week now.

Ready for a staring contest with the dubious Mr. Burns? Blink and he’ll come at you with his severely lethal overbite!