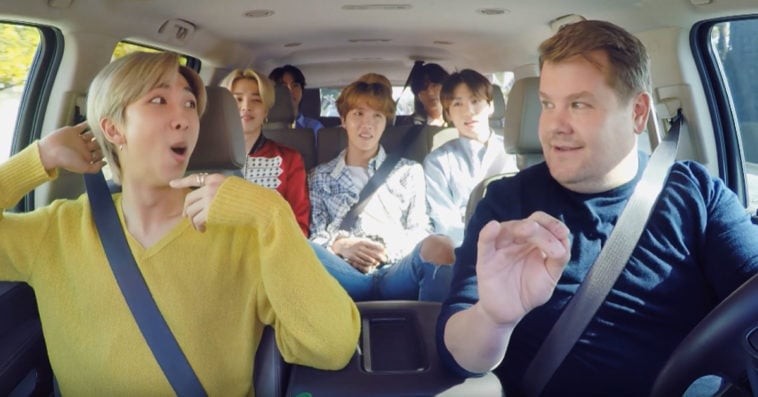 BTS’ highly anticipated Carpool Karaoke appearance on The Late Late Show with James Corden finally aired on CBS on Tuesday night. And while most fans expected that the segment would just show V, Jungkook, Jimin, Suga, Jin, RM, and J-Hope singing along to their most recent hits, it ended up being way more than that.

In the 17-minute clip, the South Korean boy band sings along with their song Mic Drop from their fifth extended play Love Yourself: Her, as well as with ON and Black Swan, which are their first two singles from their recently released fourth studio album, Map of the Soul 7. The group also belts out Bruno Mars’ Finesse and Post Malone’s Circles.

In between sing-alongs, Corden asks them some interesting questions that make their ride even more exciting. RM, for instance, shares that he learned how to speak English with the help of the classic NBC sitcom Friends. “My mom bought me the DVDs, the whole seasons, 10 seasons,” he said. “I watched it first with the Korean subtitles, and then with the English subtitles, and then without it, so I think that really helped me out.” Funnily enough, Jin comments that he, too, watched the series, but didn’t learn to speak English.

They also talk about the nicknames their fans have given them, the celebrities they were most excited to meet, and how they resolve conflict among the group.

At the latter part of the clip, Corden lets the band know that he will quit his job in a heartbeat just to become the eighth member of BTS. Asked if he’s prepared to go on a world tour, the host answers, “I was born ready. I think I can come as a dancer ‘cause I’ve got moves. I dance every week at PlyoJam, my exercise dance class, and I am telling you now I can keep up.”

To show BTS his dancing skills, Corden brings the septet to Moore Dancing dance studio, where BTS ends up dancing to Iggy Azalea’s Black Widow and Zara Larsson’s Ain’t My Fault. In return, BTS, with Jimin in the lead, teaches Corden and the rest of the people in the dance studio a portion of the complicated and intense choreography to their new hit song, ON.

Watch the full segment in the video below: