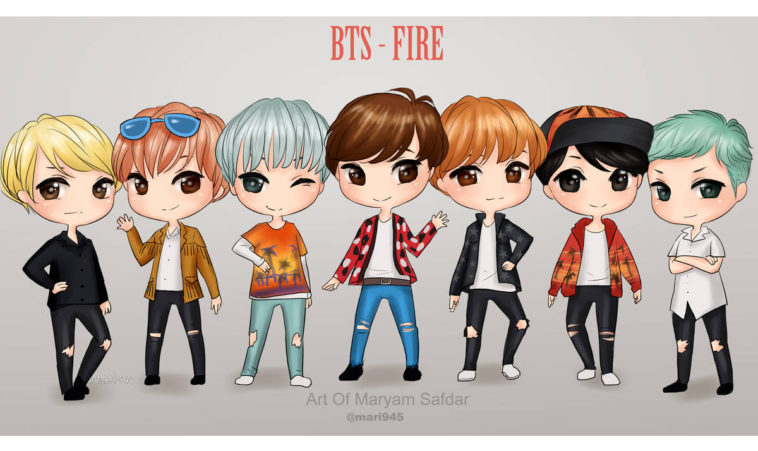 With over 18 million followers on Twitter, 16 million on Instagram, and 8 million on Facebook, BTS is no doubt one of the hottest boy band in the world right now. And with a huge following like that, it isn’t surprising to see lots of online fan art dedicated to the k-pop group and its individual members Jin, Suga, J-Hope, RM, Jimin, V, and Jungkook.

Like in most fandoms, BTS fan art comes in different styles. While realistic BTS fan art is probably the most common, there are also a number of BTS artwork created using the chibi style, cartoon style, and the manga style of drawing. Though no drawing style is essentially better than the other, the same can’t be said for the themes or subject matter of the fan art.

The best BTS fan art are usually those that have a unique concept. With a large number of BTS fan art out there, it’s common to encounter two or more illustrations that have similar content. So BTS fan art that offer something new naturally gets the most attention and praises.

Some of the best BTS fan art was featured at the 2017 Love Your BTS exhibition in what was once the Lisa Cooley Gallery in New York City. The exhibition featured around 174 artworks culled from social media through the hashtag #Love_Your_BTS —  a play on the boy band’s fifth extended play, Love Yourself: Her. Over 2,500 BTS fans, aka A.R.M.Y., went to see the two-day exhibition, which was described as a full-on fan experience that deviated from the norms of a gallery exhibition and passive appreciation of art.

With BTS fans residing in different parts of the globe, that number is clearly a small portion of the massive fandom. So if you’re one of those who missed the Love Your BTS exhibition, let us ease your yearning for amazing BTS fan art with our own curated list of eclectic BTS-inspired artwork.