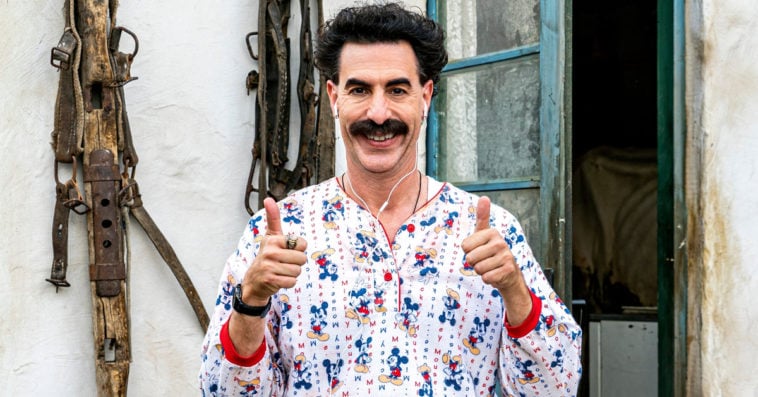 Sacha Baron Cohen and his alter ego Borat Sagdiyev have both responded to Rudy Giuliani’s claims about a controversial scene from Borat Subsequent Moviefilm, in which Giuliani is seen in a compromising position after having an interview with Maria Bakalova’s character.

In the much-talked-about scene, Borat’s 15-year-old daughter Tutar (played by 24-year-old Bakalova) interviews the former New York City mayor and Donald Trump’s current personal attorney in a hotel room. After the interview, Giuliani and Tutar have a drink in the bedroom. They remove their mics and Giuliani, at one point, puts his hand on Tutar’s waist. He then lies down on the bed and sticks his hand down his pants, appearing to touch himself. But before anything else happens, Borat bursts into the room, saying “She’s 15. She’s too old for you.”

After the scene went viral on social media and made headlines around the world, Giuliani took to Twitter to defend himself. “The Borat video is a complete fabrication. I was tucking in my shirt after taking off the recording equipment,” he wrote. “At no time before, during, or after the interview was I ever inappropriate. If Sacha Baron Cohen implies otherwise he is a stone-cold liar.”

(1) The Borat video is a complete fabrication. I was tucking in my shirt after taking off the recording equipment.

At no time before, during, or after the interview was I ever inappropriate. If Sacha Baron Cohen implies otherwise he is a stone-cold liar.

But Baron Cohen isn’t buying Giuliani’s excuse. “If the president’s lawyer found what he did there to be appropriate behavior, then heaven knows what he’s done with other female journalists in hotel rooms,” Baron Cohen said during an appearance on ABC’s Good Morning America. “I just urge everyone to watch the movie … it is what it is, he did what he did. Make your own mind to us, but it was pretty clear to us.”

Bakalova, who also appeared on the morning show, expressed her gratitude to Baron Cohen for ensuring her safety for the duration of the film’s production. “I want to thank you that I was sure you were gonna save me from everything,” the Bulgarian actress told her co-star, noting that she “always felt safe” with the movie’s crew. “I actually never felt that I’ve been in danger,” she added.

Borat, meanwhile, surprisingly defended Giuliani in a Twitter video, but in his signature satirical style.  “I here to defend America’s Mayor, Rudolph Giuliani. What was an innocent sexy-time encounter between a consenting man and my 15-year-old daughter has been turned into something disgusting by fake news media,” says the fictional Kazakh journalist. “I warn you – anyone else try this and Rudolph will not hesitate to reach into his legal briefs and whip out his su-penis.”

Following the scandal, Trump talked about Baron Cohen saying, “I don’t find him funny. I don’t know anything about him other than he tried to scam me. He came in as a BBC – British broadcasting anchor. To me, he was a creep.” Back in 2013, Baron Cohen interviewed Trump as Ali G on Da Ali G Show, where the faux-streetwise poseur character tried to pitch an ice cream glove to the reality star.

Baron Cohen took to Twitter to reply to Trump. “I admit, I don’t find you funny either. But yet the whole world laughs at you. I’m always looking for people to play racist buffoons, and you’ll need a job after Jan. 20. Let’s talk!” wrote Cohen after thanking Trump for the free publicity for his film.