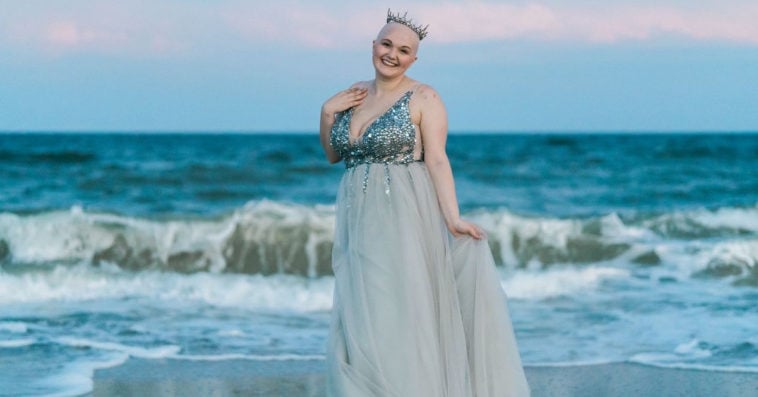 Natalie Thomas, a 25-year-old Myrtle Beach native with a rare form of kidney cancer, is pushing for Disney to create a bald princess.

As part of the treatment for her primitive neuroectodermal tumors, Thomas goes to the Medical University of South Carolina every other week for chemotherapy. And like several chemotherapy patients, Thomas also struggled with losing her hair. “That was very difficult on me,” Thomas said in an interview with ABC 15 News. “I had very long hair, I had long hair my whole life.”

While losing her hair was personally hard for Thomas, it didn’t take long for her to become more concerned about children that are dealing with the same struggle. “I can’t imagine a little kid going through the same thing I’m going through, because it’s a lot more difficult for them I’m sure,” said Thomas.

With the assistance of her brother Dustin McKibben, who is also a photographer, Thomas did a photoshoot on the beach (as seen in the picture above). “I wanted it to be a super fancy dolled up thing, so it was kind of like a mock shoot of what I want to do for these little kids,” she said. “I felt awesome. I haven’t felt pretty in a while.”

After the photos were uploaded on social media and got hundreds of shares, Thomas said that a lot of people told her that she “looked like a Disney princess.” Since then, she’s been using the photoshoot to get more people on board with the idea of Disney creating a bald princess.

“There’s a lot of little kids who don’t have somebody who look like us to look up to and I was like ‘that would be an awesome thing if Disney were to do that,’” Thomas said. “It would be really awesome to be able to get some kind of following for some type of princess, something of the sort that little girls can look up to. Even if it’s just a short story, something that would be, you know, adorable.”

Though she doesn’t know how far this campaign will go, Thomas will continue working on it as she continues to fight for her life. According to ABC 15 News, Thomas has got about three and a half months of chemo left, and is hoping to be cancer-free after that.

Thomas shares a two-year-old son and a newborn child with her husband Timothy. To learn more about Thomas’ condition, and how you can help her family during her fight with cancer, visit her GoFundMe page here.

Source: Inside the Magic