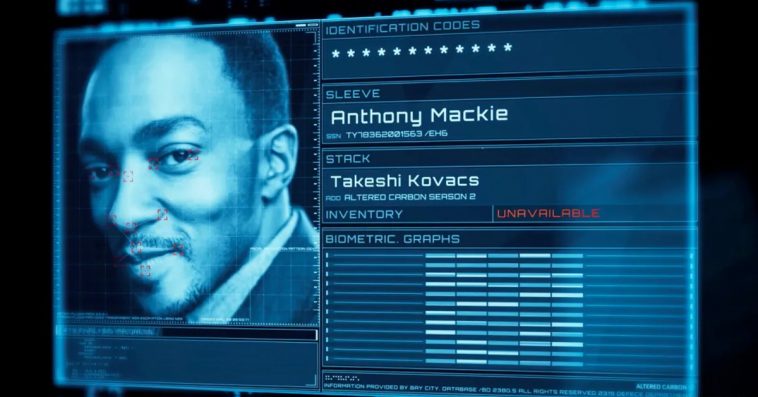 Netflix has set a premiere date for the second season of Altered Carbon.

The eight-episode Season 2 of the sci-fi drama will still center on Takeshi Kovac, who is now played by Anthony Mackie (Hurt Locker) after the character’s original portrayer Joel Kinnaman (RoboCop) left the series at the end of Season 1. Since Altered Carbon is set in a future in which humans can transfer their consciousness and memories between different bodies referred to as “sleeves,” the said major recasting was not complicated production-wise.

In addition to Mackie, other actors who are joining the series for its new season are Lela Loren (Power) as Danica Harlan, governor of Harlan’s World; Simone Missick (All Rise) as bounty hunter Trepp; Dina Shihabi (Tom Clancy’s Jack Ryan) as DIG 301, an artificial intelligence designed to assist archaeologists; and James Saito (The Terror) as Tanaseda Hideki, a centuries-old organized crime boss who has quite a bit of power on Harlan’s World.

Though the video that accompanies the tweet doesn’t give away any plot details about the new season, Netflix revealed that the show’s sophomore run will see Kovac continuing his galaxy-spanning and centuries-long search for his lost love, Falconer, all while trying to solve a string of murders. Interestingly, it seems though that both of his missions are connected to each other.