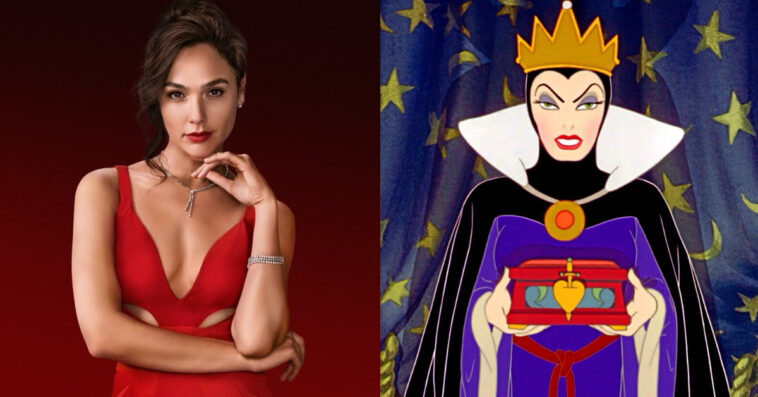 Gal Gadot has been cast to play the Evil Queen in Disney’s live-action adaptation of Snow White.

Deadline broke the casting news last Wednesday, with Gadot confirming it later that night. “I’m so excited,” she told Variety at the premiere of her new action film, Red Notice, which is set to premiere on November 12th on Netflix.

Though Gadot refrained from giving away too many details on Snow White, the actress did say that the live-action movie would be “different” from the original 1937 animated film Snow White and the Seven Dwarfs.

“There is so much that I cannot share with you that will actually answer this question,” replied Gadot when asked what attracted her to the role of the Evil Queen in the new iteration of the Disney classic. “But the take on this story is so different and delightful and full of joy… I’m very, very excited. I wish I could share more.”

In the Snow White and the Seven Dwarfs cartoon, which is based on a German fairytale by the Brothers Grimm, the Evil Queen attempts to trick Snow White into eating a poisoned apple after becoming jealous of her beauty. Known for her famous line “Mirror, mirror on the wall, who is the fairest of them all?”, the Evil Queen was voiced by actress Lucille La Verne in the animated feature.

Variety asked Gadot to give her best “mirror, mirror” reading at the Red Notice red carpet premiere, but the actress refused, saying, “I want you to come to the movie.”

Gal Gadot's keeping her Evil Queen impression under wraps until it's time to watch her #SnowWhite live-action remake in theaters: "Now, are you crazy? No! I want you to come to the movies." https://t.co/jyWkg31geN pic.twitter.com/lPIJc1sxeB

Gadot will star opposite Rachel Zegler in the live-action Snow White movie, with the latter playing the titular role. Directed by Marc Webb (The Amazing Spider-Man) and produced by Marc Platt (La La Land), the film will reportedly expand upon the story and music from the original, with Oscar- and Tony-winning duo Benj Pasek and Justin Paul (La La Land, The Greatest Showman, and Dear Evan Hansen) writing new songs for the movie.

Snow White and the Seven Dwarfs was Disney’s inaugural animated feature. Though it became a massive success for Disney, the latter has reportedly taken its time on bringing the fairytale into live-action primarily because the studio is making sure it gets the music right. Sources told Deadline that the higher-ups at Disney are excited with what Pasek and Paul have come up with following early returns.

Though it was reported that production on Snow White is expected to begin in 2022, it’s unclear whether Gadot will head into production first on Snow White or Wonder Woman 3, which was put on the fast track when it was officially announced by Warner Bros. last December.

“I can’t tell you yet,” Gadot told Variety when asked for a timeline on the third installment of Patty Jenkins’ Wonder Woman film series. “But we’re working on the script.”