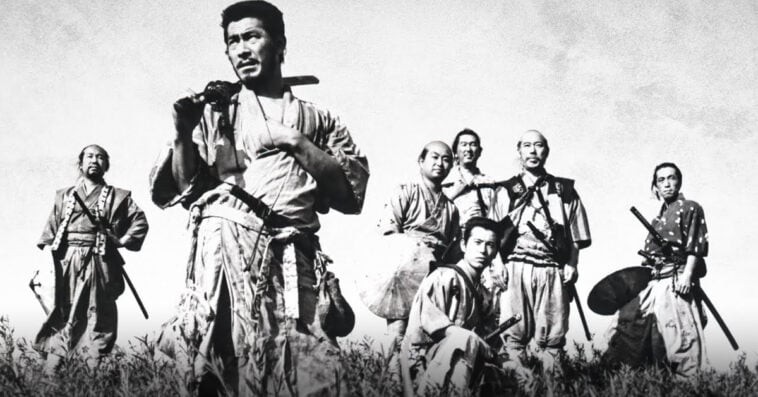 Like any other form of art, cinema is subjective. Films that are great to some, maybe mediocre to others, and that’s completely understandable. With the rise of streaming services, movies ― both old and new ― have become more accessible to people than ever, resulting in a more divided opinion on motion picture projects. While it’s impossible for the question “What’s the best movie ever made?” to have one single answer, we at GeekSpin think that Akira Kurosawa’s Seven Samurai is the best film of all time.

From a creative and technical standpoint, arguably no film has had a long-lasting impact on cinema as the 1954 epic samurai drama movie Seven Samurai.

Co-written, edited, and directed by Kurosawa, Seven Samurai is largely credited for popularizing the “assembling the team” trope in movies and other media, which has since become a common theme in many action movies, heist films, and even flicks in the science fiction genre.

Seven Samurai even spawned its own subgenre of “men-on-a-mission” films. Dubbed the Seven Samurai Formula, the narrative structure follows a team of disparate characters that are grouped to undertake a specific mission.

What is Seven Samurai about?

Set in 1586 during the Sengoku period of Japanese history, Seven Samurai tells the story of a samurai who answers a village’s request for protection after he falls on hard times. A large group of bandits is expected to steal the village’s crops after the harvest season, so the samurai gathers six others to help him teach the villagers how to defend themselves.

The village patriarch, referred to as Grandad, was played by Kokuten Kōdō, while Shinpei Takagi portrayed the bandit chief.

On Rotten Tomatoes, Seven Samurai holds a perfect approval rating of 100% based on 90 reviews, The website’s critical consensus called the film a “masterpiece,” thanks to its engrossing story, superb movie dialogue, memorable characters, brilliant acting, and stunning action sequences.

The movie doesn’t have a complex story, but its interesting plot is more than enough to keep the audience invested. Since the film is set more than 400 years ago, it also serves as reference material for scholars studying Japanese culture during the 16th century.

Since its release, the film has consistently ranked high in different critics’ lists of the best movies ever made. For instance, it was voted the greatest foreign-language movie of all time in a 2018 BBC poll of 209 critics in 43 countries. The film was also voted the second-best action movie of all time in the 2019 Time Out poll and ranked at No. 7 on Time Out magazine’s list of The 100 Best Movies of All Time.

Within the first twelve months of its Japanese release, Seven Samurai earned a distribution rental income of $2.3 million, against a production budget of $580,000. It was Japan’s third highest-grossing film of 1954, out-grossing Godzilla.

Though the box office income for its 1956 North American original release is unknown, Seven Samurai grossed at least $833,533 in the U.S. after two re-releases in 2002.

Seven Samurai has been remade several times, and one of its most straightforward adaptations is John Sturges’ 1960 movie The Magnificent Seven. Sturges took Seven Samurai and adapted it to the Old West, replacing the samurai with gunslingers.

Below is the trailer dropped by the British Film Institute for the 2021 re-release of Seven Samurai in the United Kingdom.

Where to watch Seven Samurai

In the United States, Seven Samurai is currently streaming on Criterion Channel and on HBO Max. Fans can also watch the movie by renting or purchasing a digital copy on iTunes, Amazon, Google Play, and Vudu, from $3.99 to $12.99. In addition to the complete 207-minute film, this DVD set is accompanied by two full-length commentary tracks, including a new track combining the critical insights of film scholars David Desser, Joan Mellen, Stephen Price (author of The Warrior's Camera: The Cinema of Akira Kurosawa), Tony Rayns, and the dean of Japanese film experts, Donald Richie (author of The Films of Akira Kurosawa).

Who is Akira Kurosawa?

Widely regarded as one of the most influential filmmakers in cinematic history, Kurosawa directed 30 films during his five-decade career in the motion picture industry.

Kurosawa started working in the Japanese movie industry in 1936 following a short stint as a painter. After years of working as an assistant director and scriptwriter on several movies, he finally made his debut film as a director during World War II with the popular 1943 action film Sanshiro Sugata.

The critical acclaim of Kurosawa’s 1948 movie Drunken Angel, which featured the then little-known actor Toshiro Mifune in a starring role, cemented the director’s reputation as one of the most important young filmmakers in Japan. Following the success of their first movie together, the two men went on to collaborate on another 15 films.

In addition to Seven Samurai, Kurosawa’s other notable films include the drama Ikiru (1952), the period drama Throne of Blood (1957), and the samurai flick Yojimbo (1961). In 1990, he accepted the Academy Award for Lifetime Achievement.

The 50 greatest movies ever made

Seven Samurai ranks No. 1 in our list of 50 best films ever made. Other movies on the list include  It’s a Wonderful Life (1946) by Frank Capra, Pulp Fiction (1995) by Quentin Tarantino, Space Odyssey (1968) by Stanley Kubrick, the Robert De Niro-led Taxi Driver (1976) by Martin Scorsese, Citizen Kane (1954) by Orson Welles, The Shawshank Redemption (1995) by Frank Darabont, and Singin In the Rain starring Gene Kelly

The list also includes the crime movie Psycho (1960) by Alfred Hitchcock, the love story Some Like it Hot by Billy Wilder, Chinatown (1974) by Roman Polanski, The Lord of the Rings: The Return of the King (2004) by Percy Jackson, cult classic Blade Runner (1984), George Lucas’ Raiders of the Lost Ark (1981), The Empire Strikes Back (1980) and the 1994 Academy Award Best Picture winner Schindler’s List, among many others.

Is your favourite move included in the list? Click here to discover other best movies that made it to our Top 50 greatest films of all time.