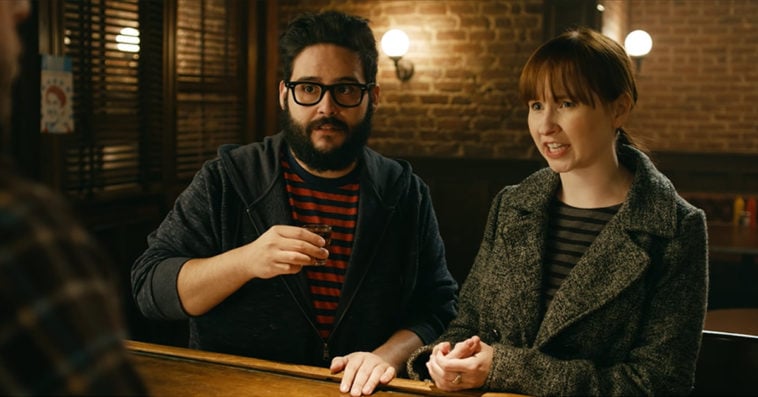 If comedy, true crime, and supernatural are three of your most favorite TV genres, then you’ll probably enjoy the upcoming web series Wayward Guide for the Untrained Eye. The trailer for the new show was released earlier this week, and it looks like something that will make you laugh while keeping you on the edge of your seat.

Produced, directed and written by comedy trio Tin Can Brothers (Corey Lubowich, Brian Rosenthal, and Joey Richter) who first gained fame as members of the popular musical theater group Team StarKid, Wayward Guide for the Untrained Eye centers on twin podcasting-team Artemis (Mary Kate Wiles) and Paul (Steve Zaragoza) who are given the chance to prove themselves as top hosts at the American Podcasting Network when an alluring corporate corruption story falls unexpectedly into their laps.

As seen in the trailer, the twins’ information gathering in the small California mining town of Connor Creek starts pretty normal. But as they get to interview more residents, the duo begins to sense that there’s something off about the town.

“Everyone in this town seems like they’re hiding something,” Artemis says in the trailer. “The locals are fiercely divided into two camps over the presence of Miner Mole Inc. In the middle of that divide, we have a dead man.”

The twins’ investigation soon leads them to the discovery of a secret race of werewolves, which forces them to reflect on who to trust and how much money they’re willing to pay for a juicy story.

Aside from Wiles and Zaragoza, the web series also stars Darren Criss (Glee, American Crime Story), Carlos Valdes (The Flash), Sean Astin (The Lord of the Rings), and a lot more.

Made possible with the support of 2,474 backers on Kickstarter, the web series is set to premiere on the Tin Can Brothers’ official YouTube account on October 13th, with new episodes being released weekly. The companion podcast episodes, meanwhile, will be available to listen on Apple Podcasts and Spotify.