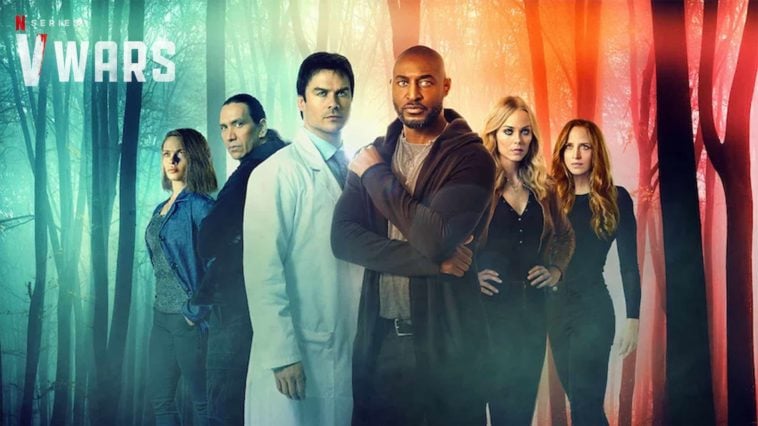 Vampires are still big business, and always will be given that they’ve dominated the landscape of popular culture for well over a century at this point. Countless TV shows about the fanged fiends have found major success during the 21st Century including movie spinoffs like Blade, From Dusk Till Dawn and What We Do in the Shadows along with True Blood, The Vampire Diaries, The Originals, The Strain and Van Helsing, so if anything it came as a surprise that it took Netflix so long to throw their hat into the ring with V Wars.

The comic book adaptation was given the green light after the streaming service acquired the rights to develop three IDW Publishing properties. Locke & Key was renewed for a second season, but October Faction was given the axe just weeks after the first season debuted. So how did V Wars fare?

Star Ian Somerhalder is more than familiar with the bloodsucking undead having been one of The Vampire Diaries’ leads for all eight seasons, but this time around the actor was playing someone that wasn’t immortal. Somerhalder headed up the cast as scientist Dr. Luther Swann, who was faced with trying to find a solution to a deadly viral outbreak caused by climate change that transforms people into monsters with an unquenchable thirst for human plasma.

Over time, society is torn apart as the disease ravages the population, pitting factions of humans and vampires against each other in a battle for supremacy. All the while, Dr. Swann’s best friend Michael Fayne has ascended the vampiric ranks to become the leader of their revolution.

The first episode did a good job of setting out the show’s stall from the outset, and if you weren’t convinced by the time the credits rolled then V Wars definitely isn’t for you. However, if you’re a fan of melodrama, occasionally over the top acting and scientific explanations that stretch the limits of credibility to breaking point though, then the first season is easily binged in one or two sittings.

This being a glossy streaming series with high production values, there’s plenty of action and solid visual effects work to be found, especially when the war between humans and vampires intensifies with a typically ill-informed and questionably motivated government at the forefront of trying to turn the tide.

Allegiances switch on a dime, plot twists come completely out of nowhere and the entire thing is played with a remarkably straight face, making V Wars the sort of show you can easily switch off your brain to enjoy for a few hours if all you want is some straightforward disposable entertainment.

In an apparent show of confidence, the tenth and final episode of Season 1 ended with a clear goal in mind for the next run, but it turns out that optimism was misplaced. In March of this year, just three months after V Wars had debuted, it was announced that it was being canceled along with October Faction, despite the show gaining something of a cult following online.

Not every Netflix original gets to be a big hit, and it would appear that vast majority of subscribers just weren’t interested enough in V Wars to give it the benefit of the doubt and check it out for themselves.