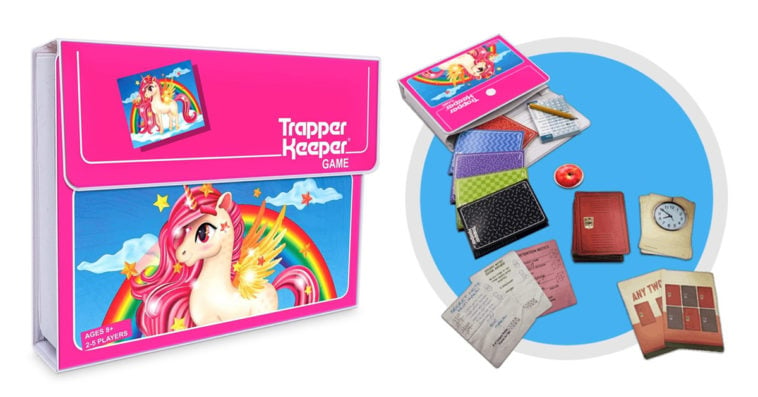 Trapper Keeper, a brand of loose-leaf binder that was popular with students from the 1980s to the 1990s, has made a huge comeback in the form of a card game.

Celebrating the best of the ‘80s and ‘90s school days, the Trapper Keeper Game challenges players to be the coolest kid in school by collecting cards with the most points and stashing them in their respective Trapper Keeper folders.

Each card in the game has a corresponding number of points and comes in the guise of homework, quizzes, parent signatures, report cards, detention slips, notes from classmates, and field trip slips. After the last bell card is played by the assigned Teacher’s Pet, the players tally up their points to find out who the winner is.

The 80’s called ☎️ We’re going #backtoschool with the NEW Trapper Keeper Game! Feeling nostalgic yet? Play the game and see who will be crowned the Coolest Kid in School ?Head to @Target to get your #TrapperKeeperGame today! Available NOW in 3 different designs and #onlyatTarget pic.twitter.com/BLOX8hUZbq

Suitable for 8 years old and up, the game is played with 2 to 5 players and has a playing time of around 25 minutes. To learn more about how the game is played, watch the video below or read the complete instruction manual here.

The Trapper Keeper Game includes 81 school paper cards, 11 bell cards, 5 mini Trapper Keeper folders, a teacher’s pet marker, a score pad and a pencil. All these are packed in a striking reproduction of the iconic Trapper Keeper notebook, complete with a Velcro closure.