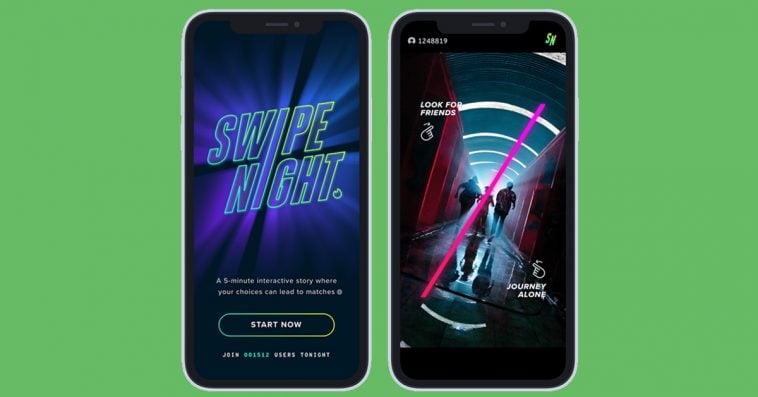 Call Swipe Night, the in-app show provides users a new way of finding their next match. Presented in a first-person, choose-your-own-adventure format, the apocalyptic series lets users decide who they will spend the last night of their lives with. To move forward with the show, users have to swipe left or right every 10 to 30 seconds, and the choices they make unlock and determine potential matches in the app.

The four-episode series is set to debut on October 6th, with episodes airing weekly in the app on Sunday nights at 6 p.m. Unlike installments of TV and web series, each episode of Swipe Night expires six hours after its release.

Swipe Night was directed by Karena Evans, the director of some of Drake’s music videos, including In My Feelings, I’m Upset, Nice for What, and God’s Plan. The show’s writers, meanwhile, included scribes from Netflix’s Big Mouth and HBO’s Insecure.

Since half of Tinder users are under 25 years old, Swipe Night is built on the ways Gen Z communicate with each other. “It was informed by a really obvious thing, which is today’s content — whether that’s a meme, reaction through an emoji, visual content, short-form story — that’s the language of Gen Z,” Tinder CEO Elie Seidman told CNBC. “They’re bonding over a shared experience.”

Though the dating app refused to comment on the budget for the show, Seidman said that they will do another series if Swipe Night gets “good resonance.”