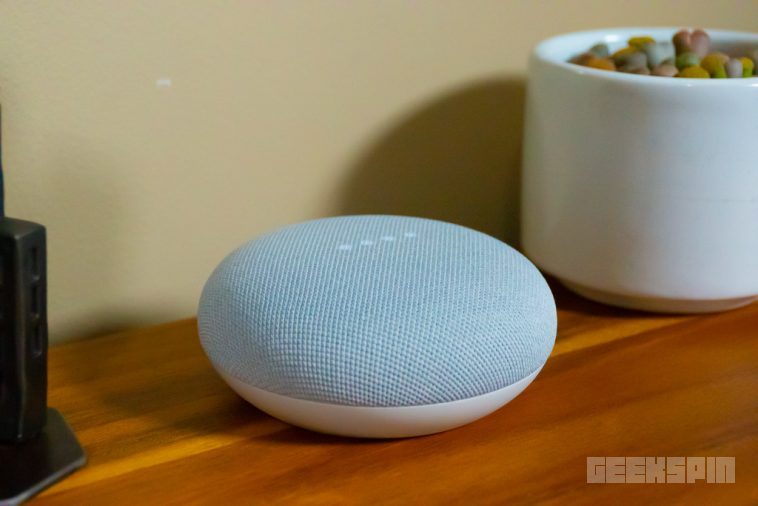 The second-generation Google Home Mini revealed this week alongside the Google Pixel 4. Now called the Nest Mini, it has received significant updates to both its hardware and software.

The Google Home Mini was first introduced in 2017 as a smaller, more affordable option to the original Google Home smart speaker. Retailing for $50, without any compromise to Google Assistant’s capabilities, it became one of Google’s most popular products. This year, Google has renamed the 2nd gen model as the Nest Mini as a part of a series of new Nest-branded smart home devices.

Despite the name change, the Nest Mini and Google Home Mini are externally identical. But this time around, the Nest Mini’s external body is made with at least 35% of consumer recycled plastic while the top mesh fabric covering is made with 100% recycled plastic bottles. A wall hook now rests at the back giving you the option of having it hang upright instead of just setting it atop a flat surface. Sky blue, has also been added as a color option in addition to the existing colors of charcoal, chalk, and coral.

Internally, an additional microphone was added to the Nest Mini giving it a total of 3, which is one more than Home Mini. The third speaker works with, what Google calls, Ultrasound Sensing. This speaker will release inaudible sounds that bounce off surrounding objects and back to the Nest Mini’s microphones. This will let the Nest Mini know that someone is nearby and it will act accordingly.

The speaker has been upgraded too. Google says that it now offers double the bass output of its predecessor. It’s also powered by an even faster processor and a new machine learning chip. This chip will support Google Assistant’s AI to help learn and recommend commands. Frequent commands will be learned and locally stored by the Nest Mini.

Two new LED lights sit on either side of the speaker. They activate when you hover your hand above the device directing you where to tap for volume adjustment while the pause and play controls remain on top. The Nest Mini is a part of the new Nest ecosystem Google is building which includes other smart home devices such as the Nest Hello, Nest Hub and Nest Hub Max.

When it comes to playing music, the new Google Nest Mini sounds significantly better than its predecessor. It’s also a whole lot more responsive to our voice commands.

The Nest Mini is available now.