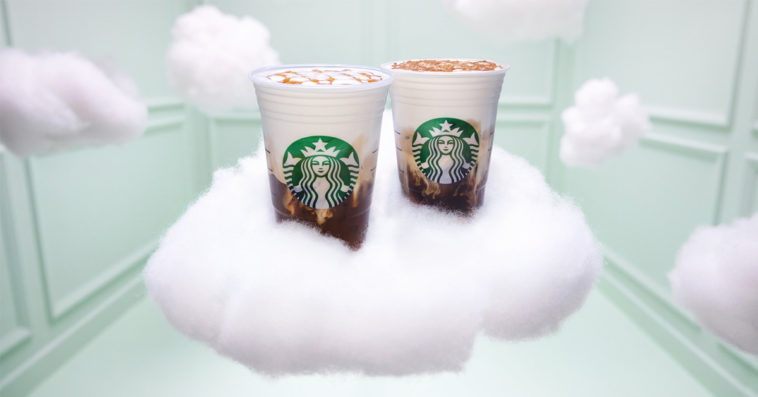 Starbucks has added a new drink to its permanent menu.

Called Cloud Macchiato, the latest concoction combines the craft of Starbucks espresso, the heritage of the Starbucks Caramel Macchiato, and the innovation of Starbucks Cold Foam. It is also inspired by the summer drink leche merengada or meringue milk, which has been available from the cafés of Barcelona, Spain since many centuries ago.

The new drink’s whipped cold foam is made with milk and espresso, complete with a caramel drizzle cross-hatch on top.  Egg white powder is also added to give the drink a meringue-like texture.

“The original Spanish beverage combines cinnamon and lemon zest, with a frothy texture which inspired us to reinvent the beverage as a macchiato,” Erin Marinan of Starbucks research and development told Fortune. “The texture of the Cloud Macchiato is luxurious and by adding espresso and our Starbucks signature caramel cross-hatch, we’re making it ours and opening up even more ways we can bring new beverage experiences to our customers.”

The Cloud Macchiato comes in two flavors: caramel and cinnamon. It is also available in iced or hot at participating U.S. and Canada stores.

The Cloud Macchiato is a collaboration with singer-actress Ariana Grande, who is known for being a fan of clouds. In fact, just last month, the Thank U, Next hitmaker launched a perfume called Cloud.

On March 5th, Grande took to Twitter to announce that she’s serving as a brand ambassador for Starbucks. Using the hashtag “StarbucksAmbassador,” Grande tweeted out images of the Cloud Macchiato and of herself wearing the Starbucks’ signature green apron.

“We’ve long been fans of Ariana Grande’s (and we’re both fans of Clouds), so we’re excited to work with her to celebrate the debut of Cloud Macchiato,” Starbucks said in an e-mail to USA Today.

As part of the promotion for Cloud Mocchiato, Grande’s favorite music, including some of her hits, will be featured on one of the playlists at Starbucks stores in the U.S. and Canada starting next week.