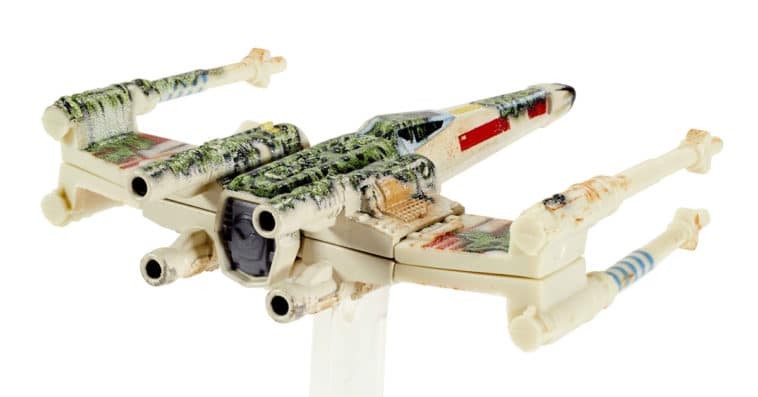 Though the annual San Diego Comic-Con will be held as an online event this year due to the COVID-19 pandemic, fans’ favorite exhibitors will still offer promotions, specials, and limited-edition products during the five-day celebration. And one of the many collector’s items that will be exclusively available at next week’s Comic-Con@Home is the Hot Wheels Star Wars X-Wing Dagobah.

After the Battle of Hoth in the 1980 movie Star Wars: Episode V – The Empire Strikes Back, Luke Skywalker (Mark Hamill) flew his X-Wing Starfighter to the remote planet of Dagobah in search of Jedi Master Yoda. A crash landing in a bog led to a rocky start but Luke eventually found Yoda and began training under his guidance. The highlight of the training was when Yoda unbelievably harnessed the power of the Force to lift Luke’s X-Wing Starfighter out of the water and move it to shore. The abovementioned Hot Wheels starfighter die-cast pays homage to this amazing cinematic moment.

With a price tag of $25, the highly detailed starfighter die-cast will be on sale in limited quantities on July 23rd at 12 p.m. ET on Instagram @mattelcreations.

In addition to exclusive product launches, Comic-Con@Home will also held panels and presentations about comics, gaming, television, film, and a wide variety of topics from publishers, studios, and more. There will also be a Masquerade, games, and other activities, in which fans can participate from the comfort of their own homes. Comic-Con@Home is set to kick off on July 22nd and will run until July 26th.