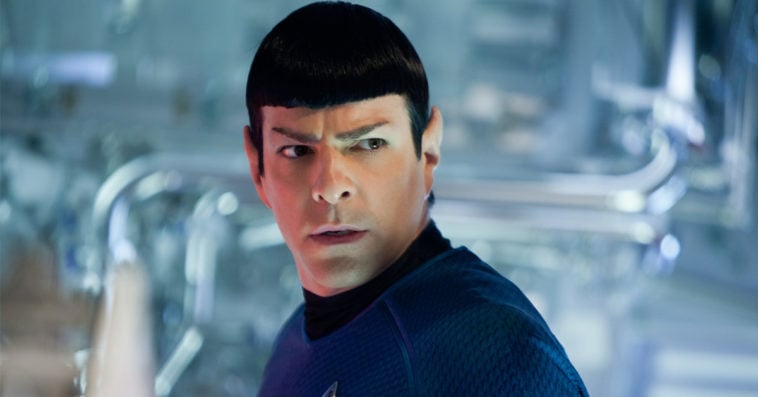 Cast members of the Star Trek Kelvin Timeline are still open to reprising their roles for another sequel movie.

Zachary Quinto, who plays Spock in the last three Star Trek movies produced by J.J. Abrams, appeared in the September 29th episode of CBS’ The Talk, and when asked about coming back for a fourth Star Trek film, the Emmy-nominated actor said he and his co-stars are all willing to return to the sci-fi franchise for another adventure.

“We talk about it all the time as the crew of the Enterprise, we’re all incredibly close friends in real life and I think all of us would welcome the opportunity to go back and keep telling those stories,” said Quinto. “[It] seems like a bit of a saturated market at this point, so I’m not sure what the plans are for the feature film versions of the franchise, but we’re all here if they want to beam us up.”

There are currently three Star Trek movies being developed. One of which is Noah Hawley’s film, which will feature a brand-new crew. The other one involves time travel and Captain Kirk’s father, which would presumably bring back the Kelvin Timeline crew. And lastly, a film from an idea by Quentin Tarantino and is inspired by the gangster-themed Star Trek: The Original Series episode A Piece of the Action. Tarantino previously said that his plans for the movie includes the return of Quinto’s team.

It’s not clear which among these three projects would end up as the next Star Trek movie, but Deadline reported in August that Paramount’s new motion picture group president Emma Watts was in the process of figuring out the best way to reboot Star Trek on the big screen.

While Quinto would be thrilled to do another Star Trek movie, the actor told ComicBook.com earlier this year that he’d also be totally fine if 2016’s Star Trek Beyond would be his last appearance in the franchise.

“I stepped away from any expectation or any real certainty that it’s ever going to happen again,” said Quinto of potentially reprising his role as Spock in the future. “I think that’s the only real way to move through the world, right? If it happens, that’d be great, but I’m not going to sit around waiting for it to happen. I have a ton of other stuff in my life, in my career. I have lifelong friendships from those films and working relationships and a lot of respect and fond memories, so if that’s what it ends up being and I can look back on my life and say that’s what it was, then that’s incredible, and if we get to do more, that’s also incredible.”