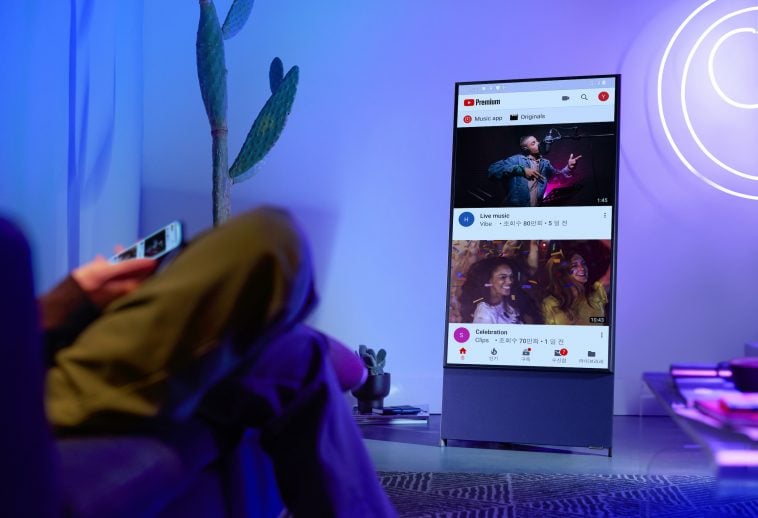 CES 2020 is chock-full of new gadgets and gizmos from Samsung. In addition to a slew of mobile computing products like the Galaxy Book Flex, this year the South Korean conglomerate is showcasing a new TV line as well as improvements to its existing QLED and Frame TV products. The latest line is called the Sero TV. It’s a first-of-its-kind vertical display designed with millennial and Gen Z buyers in mind.

Unlike the existing offering, the Sero is a mobile-first display, made to pivot between portrait or landscape mode, depending on the content the user is watching. First announced in 2019 as a concept, Samsung is signaling that the company will launch a consumer version some time this year.

When it’s not being used as a TV, the Sero acts as a music visualizer as well as a functional art piece where users can display photos – similar to The Frame.

As far as specs, we know the display will offer a 4K resolution, however, the exact dimensions remain unknown. The concept model from 2019 featured a 43-inch screen, but it’s unclear whether Samsung has plans for additional options. We did, however, get to spend some brief hands-on time with it, and while we very much appreciate the concept, we can’t help but wish it came with a built-in camera for making video calls and taking selfies.

The Samsung Qled Q950TS, on the other hand, is the company’s newly improved 8K flagship. In an age of ultra high-def video streaming, the Q950TS is engineered to deliver ultra-crisp 8K resolution. While the exterior has several noteworthy improvements such as its new, “nearly-bezel-less” design, the most impressive upgrades are arguably beneath the hood. For example, the Q950TS features improved deep learning AI technology that upscales content  – no matter the native resolution. Additionally, the Q950TS will feature Samsung Health, an application created to simplify personal health and wellness monitoring.