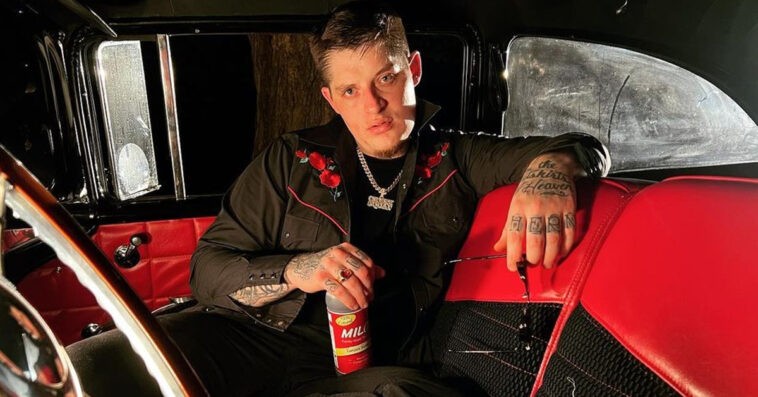 Ryan Upchurch is one of the most unique recording artists in the United States today. While he is best known for his hit songs and albums, the American rapper first gained popularity as a comedian before finally breaking out in the music industry. With his unusual route to popularity, a lot of people are wondering how rich he is. Here’s what we know about Ryan Upchurch’s net worth.

How much money does Ryan Upchurch make a year?

Ryan Upchurch has an annual income of over $1 million. The hip-hop artist is one of the highest-paid, emerging singers in the country, so it’s not surprising that he’s making such a huge amount of money every year.

What is Ryan Upchurch’s net worth?

As of December 2022, Ryan Upchurch has an estimated net worth of $5 million. Below is a rundown of how Upchurch has grown such an impressive net worth since jumpstarting his music career in 2014.

Ryan Upchurch started his career in the entertainment industry when he founded Upchurch the Redneck with his friend Shade Glover and began uploading funny videos on YouTube in 2014. Shortly thereafter, Upchurch entered the music world and started uploading audio tracks and music videos to his channel. While the majority of the content of his YouTube channel is music-related, it also features videos of him playing video games, painting, and life updates showcasing his vacations and properties like cars and vehicles.

Upchurch has over 3.01 million YouTube subscribers, as of December 2022. And since his channel has been around for over eight years now, it’s safe to assume that he’s already earned loads of money from it.

Of course, a huge portion of Ryan Upchurch’s net worth comes from his earnings as a music artist. Those include album sales as well as ticket sales from concerts and performances.

His first shot at stardom came when he released an extended play called Cheatham County in 2015, which was quickly followed by his debut studio album, Heart of America, the following year. Both releases made it to the top 30 of the Billboard Top Country Albums Chart, with Heart of America selling 1,300 copies in its first week of release.

Upchurch dropped his second full-length album, Chicken Willie, in August 2016. which reached No. 22 on Billboard’s Top Country Albums and No. 11 on the Rap Albums charts. The album sold 2,800 copies in its first week of release.

In 2017, Upchurch released the extended play called Summer Love and the full-length album titled Son of the South. Summer Love, which is completely country music-oriented with no rap elements, debuted at No. 33 in the Top Country Albums chart with 3,700 copies sold. Meanwhile, Son of the South, which is his first album under the Redneck Nation record label, debuted at No. 29 with 48,100 copies sold.

The popularity of this country-themed EP and his previous rap-centric albums earned him the moniker “country rapper.” He, however, has since diversified into other music genres including rock, hip-hop, and Southern metal.

In fact, 2018’s Creeker, the follow-up to 2017’s King of Dixie, is Upchurch’s first rock album. After Creeker’s success, Upchurch released so many other hit albums, including Supernatural, River Rat, Creeker II, and Parachute, just to name a few. His most recent album, People’s Champ, was released in February 2022.

Ryan Upchurch’s net worth is calculated with all his assets being taken into account, and that includes his cars, house and lots, and other properties.

Upchurch has a residence that he calls Casa Cerebus. The rapper uploaded a pic of the property on Instagram in July 2022, when it was still being built.

According to HighIncomeSource.com, Upchurch owns a number of luxurious cars, including a BMW 3-Series Convertible, an Audi A7, and a Range Rover.

The website also reported that Upchurch once spent $1.2 million to purchase a 3,000-square-foot, four-bedroom house in the United States. The three-story house reportedly features a spacious living room that opens onto a terrace, a fully furnished kitchen, a grand spiral staircase in the main entrance, a quaint office, and an expansive dining room, complete with a wine cellar.

What is Ryan Upchurch’s real name?

How old is Ryan Upchurch?

Ryan Upchurch was born on May 24th, 1991 in Ashland City, Tennessee. He is currently 31 years old.

Where is Ryan Upchurch from?

Ryan Upchurch grew up in Cheatham County, Tennessee, on the outskirts of Nashville, Tennessee. Unfortunately, there’s no known information about his educational background, including where he attended high school or whether he went to college.

Who is Ryan Upchurch’s dad?

The identity of Ryan Upchurch’s dad is unknown, but he is the proud son of Patricia “Patty” Lynn.

Does Ryan Upchurch have siblings?

According to Celebseek, Ryan Upchurch has three brothers. One of those is Austen, who starred in the rapper’s music video below:

Does Ryan Upchurch have a wife?

Ryan Upchurch married his best friend, Taylor Eileen Smith, in September 2020 after proposing to her in July of the same year. The two, however, appear to have broken up, as the rapper’s recent Instagram posts suggest that he’s now in a relationship with a woman named Bethani. The hip-hop rapper has recently been very candid about his personal life, especially about his present romance on social media.

Prior to his relationship with Smith, Upchurch dated Brianna Vanvleet as well as singer Katie Noel. Upchurch and Noel split up before the 2019 debut of the music video for their collaborative song, Hey Boy, Hey Girl.

Does Ryan Upchurch have a kid?

Ryan Upchurch is not yet a father. He, however, briefly stepped into the role of a stepdad to Raelynn Ann — the daughter of his ex-wife, Taylor Eileen Smith, from a previous relationship.

Does Ryan Upchurch have dogs?

While Ryan Upchurch has yet to have children of his own, the rapper is a fur parent to a cat named Vulpix and a dog named Waylon.

Was Ryan Upchurch in the military?

No. Ryan Upchurch has never served in the military. He, however, has been confused with his namesake, Army Specialist Clinton R. Upchurch, who died on January 7th, 2007 during patrol operations when an improvised explosive device detonated near his Humvee and enemy forces attacked using small-arms fire in Samarra, Iraq. He was 31.