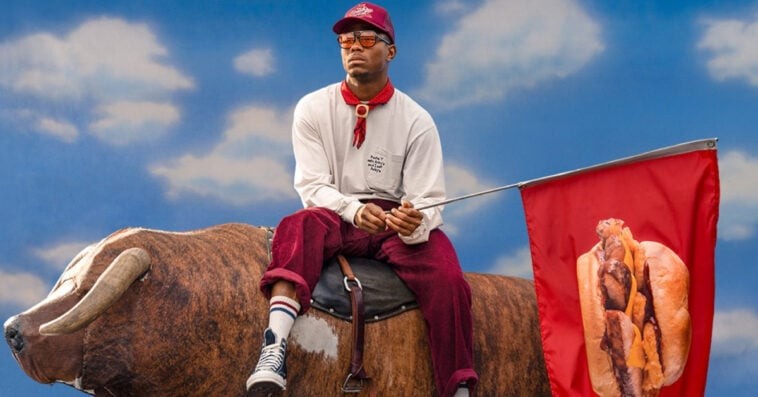 Pusha T has done it again.

The accompanying video for Rib Roast features an appearance by bull riding champion Ezekial “Blue” Mitchell. As of writing, the video already has over 15,000 views on YouTube.

“We are on a mission to call out weak sandwiches of questionable quality, and there is no other product that can compare to our REAL Country-Style Rib Sandwich or is worthy of Pusha T’s praise,” said Arby’s President Jim Taylor in a statement via AllHipHop. “We’ve spent years perfecting the intricate smoked rib flavors and are proud to have Pusha remind people why Arby’s has the meats -and smokes the competition.”

To further promote Arby’s new Real Country Style Rib Sandwich, Pusha T also teamed up with the chain on a limited-edition line of merchandise inspired by the sandwich, including bolo ties, trucker hats, and shirts. Check out the photos of the merch in the gallery below:

Pusha T and Arby’s first collaborated last March on a “diss track” criticizing McDonald’s Fillet-o-Fish and explaining why Arby’s new fish sandwich is much better. Below are the lyrics of the track:

“I’m the reason the whole world love it / Now I gotta crush it / Filet-o-Fish is *** / And you should be disgusted / How dare you sell a square fish, asking us to trust it,” raps Pusha. “A half slice of cheese, Mickey D’s on a budget? / Arby’s crispy fish is simply it / With lines ’round the corner / You might need as guest list / Exit stage left, the sandwiches taste fresh / A little cube of fish from a clown is basic / Say less, this argument is baseless / Drowned in tartar, that Filet-o-Fish is tasteless / Arby’s only deals in the greatness / I bet the house on it like it’s Vegas / I could sell water to a whale / How could you ever think I’d fail / The crispy fish sandwich blazin’ trails / Them other clowns just too frail / If you know me and you know me well / Our fish is gonna tip that scale.”

In an interview with Complex earlier this week, Pusha T shared why he and Arby’s have a strong partnership.

“The business relationship between Arby’s and me is really strong because we’re both just very passionate and very committed to the quality that we put out,” the rapper said. “That’s what I’ve noticed, synonymously, myself and my music, and with them it’s the food and the product and just making everything connect and making the storylines connect.”

He continued, “They have a different level of commitment and focus that I’ve never seen in working with another brand. Any time they bring up these activations and these ideas, I’m always open for a listen because they are very, very meticulous about what it is that they do.”

Who is Pusha T?

Born Terrence LeVarr Thornton, Pusha T rose to fame as one-half of the hip hop duo Clipse, alongside his older brother No Malice. After releasing three studio albums and a number of mixtapes from 1994 to 2010 as one-half of Clipse, Pusha T signed to Kanye West’s GOOD Music imprint. In 2013, he released his debut solo album My Name Is My Name, and in 2015, West appointed him to take over his role as president of GOOD Music.

Since then, Pusha T has released three more solo albums: King Push – Darkest Before Dawn: The Prelude (2015), Daytona (2018), and It’s Almost Dry (2022). Pusha T is currently on tour in support of his It’s Almost Dry album, which is his first album to hit No. 1 on the Billboard album chart.