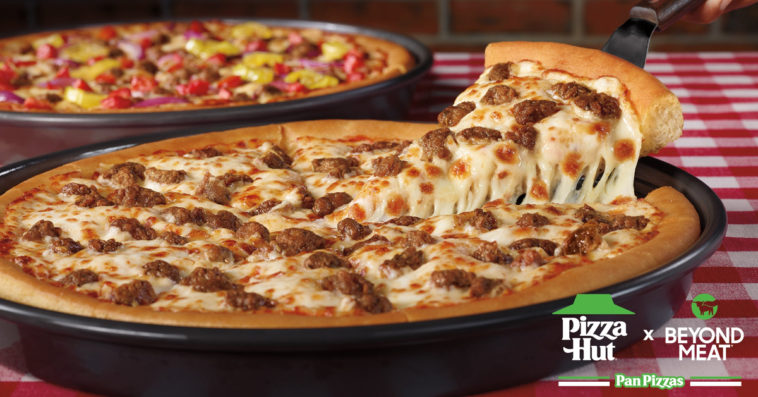 The Beyond Italian Sausage is a plant-based sausage that delivers an authentic and mouthwatering taste, thanks to its high-quality ingredients that include a mix of classic Italian herbs and spices like garlic, onion, paprika, and fennel seeds.

“I’d challenge anyone to go try the new Beyond Pan Pizza and tell the difference. I shared it with friends and family, and they couldn’t,” said Pizza Hut chief brand officer David Graves in a statement. “The Beyond Italian Sausage is rich, juicy and has the signature Pizza Hut flavors—pizza lovers everywhere are going to love it.”

Beyond Meat CEO Ethan Brown told CNBC that Pizza Hut really pushed for a plant-based sausage that was indistinguishable from the real thing. “We really wanted to build something that was unique in the market,” he said. “A lot of people can make a crumble out of protein these days, but this is something special because we took the time with Pizza Hut to get it right.”

In a separate interview with Forbes, Graves revealed that the Beyond Italian Sausage was in development for “quite some time,” adding that its culinary teams were “working in lockstep to create a proprietary sausage which has the flavor and texture of traditional Italian sausage [and] I think we’ve done just that.”

The Beyond Italian Sausage Pizza and the Great Beyond Pizza are now available for a limited time while supplies last at all traditional Pizza Hut locations nationwide for contactless delivery, carryout, and curbside pickup, and at select participating Pizza Hut Express locations.