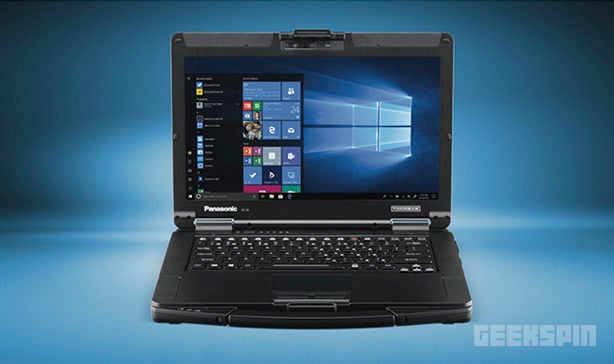 Panasonic’s Toughbook line has been at the forefront of rugged laptops since 1996. Created for use even in the most unpredictable environment, it’s no doubt that Panasonic has greatly considered the wants and needs of this niche market. This year, they’re releasing a new model in the semi-rugged class, the Toughbook 55.

Proudly being the world’s lightest and thinnest semi-rugged laptop, the Toughbook 55 weighs under 5 lbs despite being encased in magnesium alloy. It’s MIL-STD-810H certified which means that it can withstand a multitude of environmental conditions, such as high or low temperatures and altitude, as well survive a 3-foot drop. And while not waterproof, it’s still IP53 certified and comes with a spill-resistant keyboard.

One of the key innovations of the Toughbook 55 is its modular expansion packs. As a way to future proof the unit and optimize workflow, each laptop is user-upgradable by purchasing Panasonic’s expansion packs or what they call, xPak. With these expansion packs, a number of additional features can be added or upgraded such as I/O ports, dedicated graphics, a second storage drive, RAM, keyboard, 4G capability, and even a fingerprint sensor. Panasonic designed these expansion packs to be easily removed and inserted by installing a quick-release lever for most of the packs and the others requiring but a simple screwdriver. They also made the Toughbook 55 backwards compatible with docks from the previous generation to protect the previous investments of their customers.

There will be two variants available for the Toughbook 55: HD and FHD Touch. Both will feature a 14” anti-reflective, anti-glare screen but, as the name suggests, the FHD Touch model will have 1080p resolution and a 10 point capacitive touch screen that will come with a stylus. Internally, the two variants will have some differences. The HD model will be powered by an Intel Core i5 vPro processor at 1.6Ghz while the FHD Touch will have an Intel Core i7 vPro process at 1.9Ghz. Both variants will have an Intel UHD Graphics 620 card, 8 GB of RAM, and either a 512GB or 1TB SSD. All of which, as mentioned earlier, are user-upgradeable.

A rugged laptop will need a rugged battery and the Toughbook 55 battery does not the least bit short. With an astounding claimed battery life of 20 hours (the longest battery life for the Toughbook to date), it can easily achieve a max of 40 hours when upgraded with another battery pack. Holding true to its brand, the batteries are hot-swappable which means you will be able to swap batteries in the unit without having to power it down. This provides ease and convenience when on-the-go. Charging each battery to full power will only take about 3 hours.

The Toughbook 55 is also a laptop of many firsts in its class. Apart from being the thinnest and lightest, it is also the first Toughbook to offer a USB Type-C port, HDMI 2.0 and Bluetooth 5.0. Its 1080p, infrared webcam is also the first to have tetra-array microphones for unmatched speech recognition accuracy.

Other notable features include integrated dual speakers that go up to 92db, a color-selectable backlit keyboard, and a touchpad that is 25% larger than previous models.

The Panasonic Toughbook 55 will be available starting September 9, 2019, and will have an estimated retail price of about $2,099.00