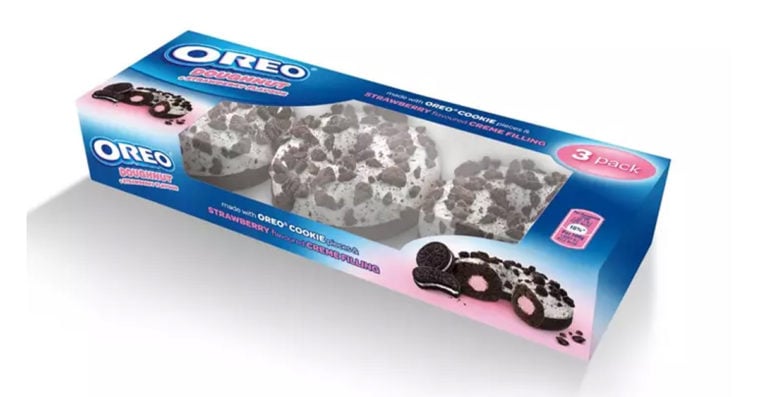 Oreo has a brand-new treat for strawberry and doughnut lovers.

The confectionery brand recently launched a strawberry cream-filled doughnut in the U.K., and it looks a lot similar to those specialty doughnuts made by Krispy Kreme, Tim Hortons, Dunkin’, and the like.

Priced at £1.50 ($1.94) for a pack of three, Oreo Doughnut Strawberry Flavor is now available at ASDA stores across the U.K. and online.

There’s no word yet on whether Oreo Doughnut Strawberry Flavor will be available in the U.S. in the future.

The release of Oreo Doughnut Strawberry Flavor in the U.K. follows last week’s launch of three Oreo x Krispy Kreme doughnuts in Australia, namely Oreo Original, Oreo Chocolate, and Oreo Strawberry. Each of these limited-edition doughnuts has a cream filling and drizzled with frosting and Oreo cookies on top.

“The doughnuts are light and fluffy, filled with a light as air cream, and then covered in the OREO cookie pieces that give it an extra indulgence. We all know and love OREO cookies, which is why we are so excited to give Aussies the chance to try them out in a new and unique way,” Krispy Kreme’s Food Technologist Tasha Kaur said in a statement.

A doughnut similar to Krispy Kreme’s Oreo Original was released in the U.S. in June as part of Tim Horton’s new set of limited-edition Dream Donuts. Called Oreo Cookie Dream Doughnut, the $1.99 confection is a cookies-and-cream style doughnut featuring Oreo cookie pieces and a vanilla fluff icing swirl on white fondant, topped with an Oreo cookie half.