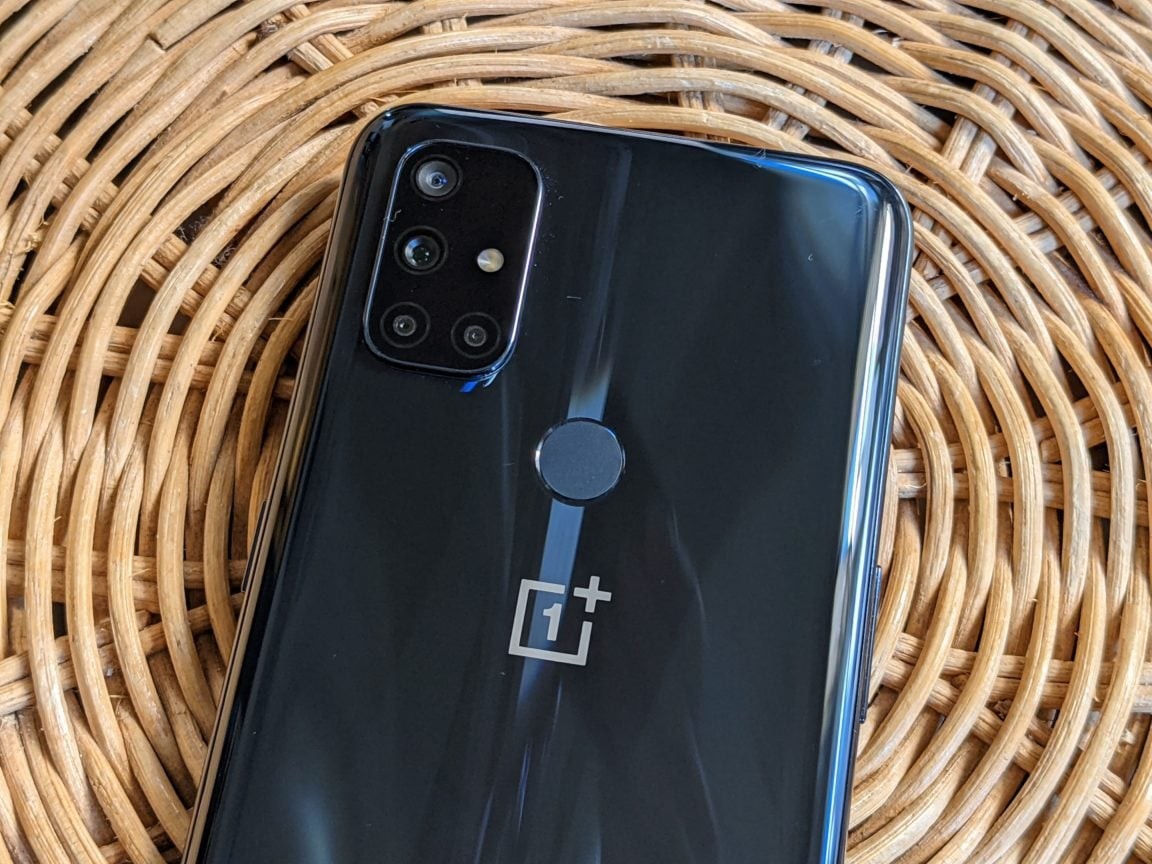 It’s 2020 and — in case you missed it among the chaos — OnePlus is all grown up now. After seven years of mostly predictable “tic-toc” product cycles (new “flagship killer” in the spring, revised version in the fall), the company finally went upmarket with the $899 OnePlus 8 Pro (launched alongside the $699 OnePlus 8, or “tic”), and downmarket with the €399 OnePlus Nord (followed by the $749 OnePlus 8T, or “toc”).

While the OnePlus Nord is a phenomenal mid-ranger, it’s only available abroad. Fortunately, OnePlus promised to bring a variant to the US, which it recently launched as the €349 OnePlus Nord N10 5G. Despite the Nord moniker, this is a completely different phone — a downgrade from the original. The company sent me a European review unit ahead of the US release, so let’s take it for a spin.

How much of a downgrade is it from the original Nord? What’s better and what’s worse? Most importantly, does the N10 5G still deliver the kind of top-notch performance and value you’ve come to expect, or has OnePlus lost its way?

The OnePlus Nord N10 5G (ugh, that name) is a detuned version of the original OnePlus Nord that shares its design language with the new OnePlus 8T. It swaps the Nord’s Snapdragon 765G chip for a Snapdragon 690, and the 6.44-inch AMOLED screen for a 6.49-inch IPS panel. This also means the Nord’s optical in-display fingerprint sensor gives way to a rear-mounted capacitive fingerprint scanner.

On the plus side, the N10 5G benefits from a higher resolution main shooter (64MP vs. 48MP) — albeit without OIS — and a larger capacity battery (4300mAh vs. 4115mAh). It’s also the company’s first handset with a headphone jack since the OnePlus 6. While the N10 5G loses the Nord’s additional ultrawide selfie camera, it gains stereo speakers. And for the first time since the OnePlus X, there’s microSD support.

In front, the N10 5G packs a 6.49-inch FHD+ IPS screen (2400 x 1080 pixels, 406ppi) with a 20:9 aspect ratio and a 90Hz refresh rate. You’ll find a punch hole in the top left corner for the 16MP f/2.1 1.0-micron shooter, and despite small-ish top and side bezels, there’s a rather unsightly chin at the bottom. OnePlus even tried to minimize the visual impact of this chin by tapering the bottom edge of the glass. 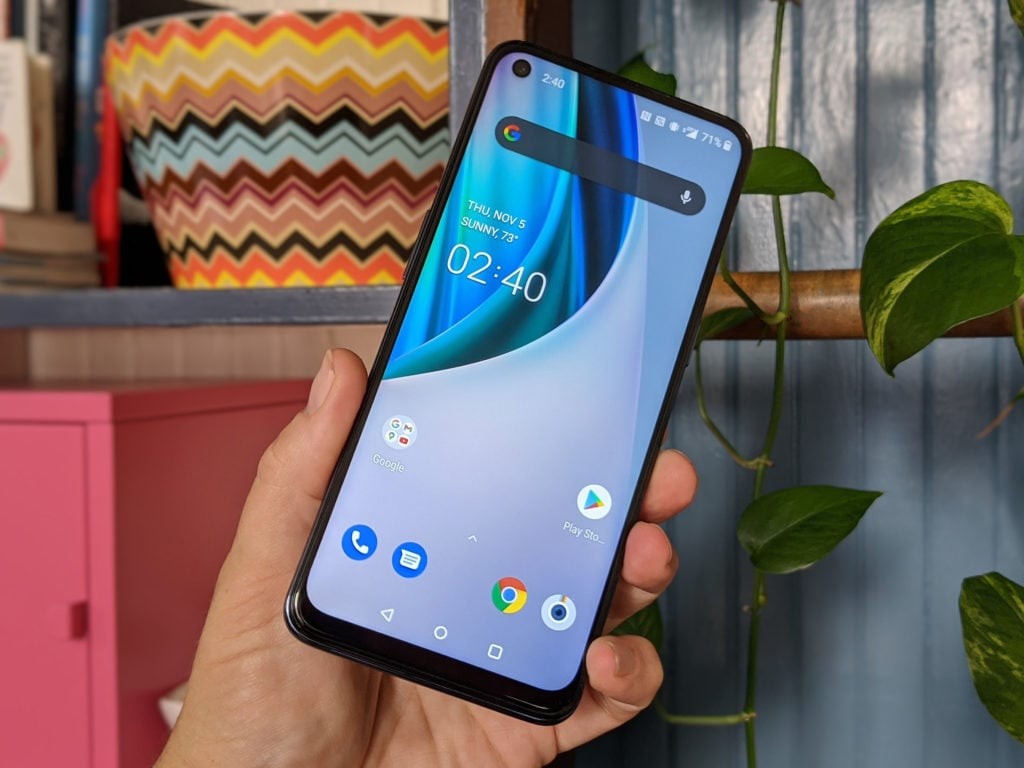 The N10 5G comes in just one color (Midnight Ice), and uses plastic for both its mid-frame (like the Nord) and its shimmery faux-glass rear panel. Still, it feels reasonably well made. At 163 x 74.7 x 9mm and 190g, it’s slightly larger and heavier than the original Nord. But this isn’t a big phone, and it’s easy to handle. I only wish OnePlus had installed the fingerprint scanner in the power/lock key, for a more modern vibe.

Peeking along the edges, the power/lock button is located on the right side, and there’s a volume rocker and dual-SIM/microSD tray on the left. You’ll find a speaker, USB Type-C port, primary mic, and headphone jack along the bottom edge, and the secondary mic perched on top. Unfortunately, the N10 5G lacks the alert slider that’s been present on every OnePlus handset since the OnePlus 2. And that’s a bummer. 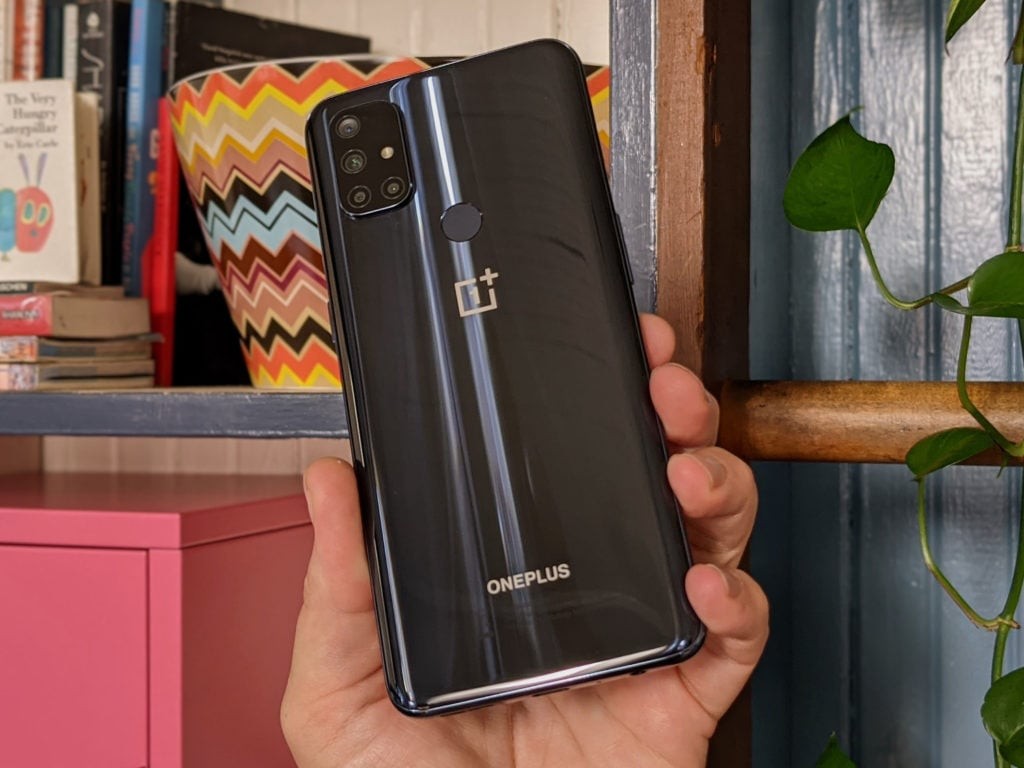 Under the hood, the N10 5G features Qualcomm’s new Snapdragon 690, the company’s first 600-series SoC with built-in 5G. It’s paired with 6GB of LPDDR4x RAM and 128GB of UFS 2.1 storage, which is the only memory configuration available. The battery is 4300mAh and supports 30W fast charging (Warp Charge 30T) via the supplied charger. As you’d expect, there’s no wireless charging here.

The rest of the N10 5G specs are par for the course: CAT 18 LTE, WiFi ac, Bluetooth 5.1 LE, NFC, dual-band A-GPS / GLONASS / Galileo / Beidou, plus the usual assortment of sensors. Obviously, this is a sub-6GHz 5G phone, but my European review doesn’t support any of the US 5G bands currently deployed here in San Francisco. Still, it worked fine on T-Mobile, AT&T, and Verizon’s 4G LTE networks.

Specs matter, but you’re probably more interested in what the OnePlus Nord N10 5G is like to use. Here are my thoughts after a few days of testing. Design-wise, this handset echoes the OnePlus 8T. That’s a good thing. Sadly, the massive chin at the bottom of the display and the rear-mounted capacitive fingerprint sensor betray the N10 5G’s pedigree. Ultimately, this phone looks and feels kinda cheap.

While build quality is solid and it’s comfortable to hold, the N10 5G lacks the attention to detail OnePlus is known for. There’s no iconic alert slider, precise vibration motor, or hidden water / splash resistance (no SIM tray gasket) here. In back, the slippery faux-glass cover is a fingerprint magnet that’s difficult to clean. Overall, the N10 5G is noticeably less refined than other OnePlus handsets — including the original Nord.

The screen is lovely for an IPS panel. It’s perfectly flat and easy to read in direct sunlight. Colors are vibrant, viewing angles are great, and contrast is high. The 90Hz refresh rate is just the icing on the cake — it makes everything smooth as silk. Basically, once you’ve lived with a high refresh rate display, there’s no going back. That chin is an eyesore, though. Did it really have to be this large?

When it comes to imaging, the N10 5G looks alright on paper. But despite boasting a higher resolution main camera, it’s a downgrade from the Nord. Instead of pairing Sony’s excellent IMX 586 48MP sensor with OIS, the N10 5G relies on an Omnivision OV64B 64MP sensor and EIS. And while this sensor “bins” (combines) four pixels into one for better low light performance, it’s no match for the Nord’s sensor.

As for the remaining shooters, the 8MP ultrawide and 2MP macro are lifted right from the Nord, and inherit the same compromises. The 2MP monochrome lens carries over from the OnePlus 8T, and is used when taking B&W pictures. On the video front, the N10 5G shoots at up to 4k 30fps and 1080p 60fps with the main and ultrawide cameras, and maxes out at 1080p 60fps for selfie clips — all stabilized, with stereo audio.

Photo modes include panorama, portrait, Nightscape (night), pro (manual), macro, and monochrome. Video modes include time lapse and slow motion (1080p 120fps and 720p 240fps), but the N10 5G lacks the Nord’s Super Stable mode. Night mode is only available on the main shooter and the ultrawide, but crops the main sensor a little to enable electronic stabilization, and disables zooming.

Overall, photos and videos captured with the N10 5G are okay, but don’t really stand out. Daytime shots are fine, but this phone struggles in low light — especially with the ultrawide. And while Nightscape helps, the resulting images are merely adequate. Zooming works reasonably well up to 3-4x (given enough light), but anything much beyond that quickly turns to mush. And while the macro is useless (no AF), selfies are pretty nice. 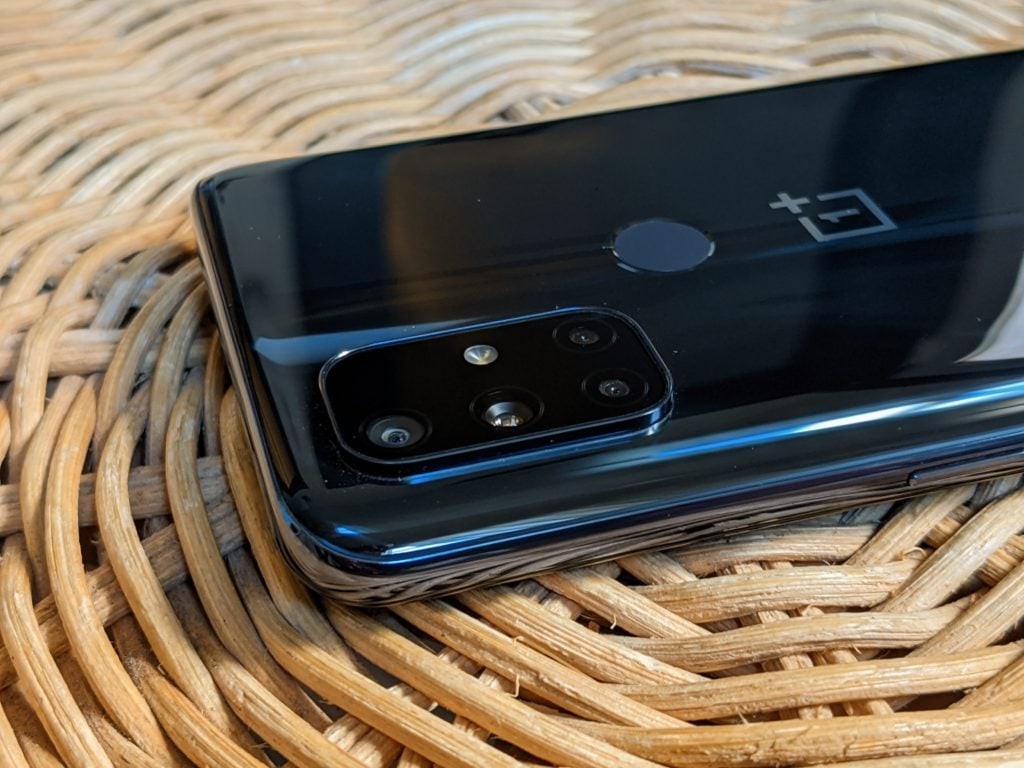 The N10 5G features stereo speakers (earpiece in front plus speaker in the bottom edge) that sound loud and clear. It’s a decent setup, and a big improvement over the Nord’s mono speaker. But it’s the headphone jack I’m most impressed with. The DAC delivers superb audio and the amp packs enough punch to drive a wide range of headphones and earbuds. Also present: Dirac audio enhancement, plus aptX HD and LDAC support.

And now for the big question. How does the N10 5G perform? Clearly, the 90Hz screen is going to keep things fluid, but is that Snapdragon 690 powerful enough (and is 6G of RAM sufficient) to deliver that wonderfully quick OnePlus experience? Yes and no. On the one hand, I didn’t have any performance issues with the N10 5G. It ran my usual suite of apps without skipping a beat — and I’m a power user. 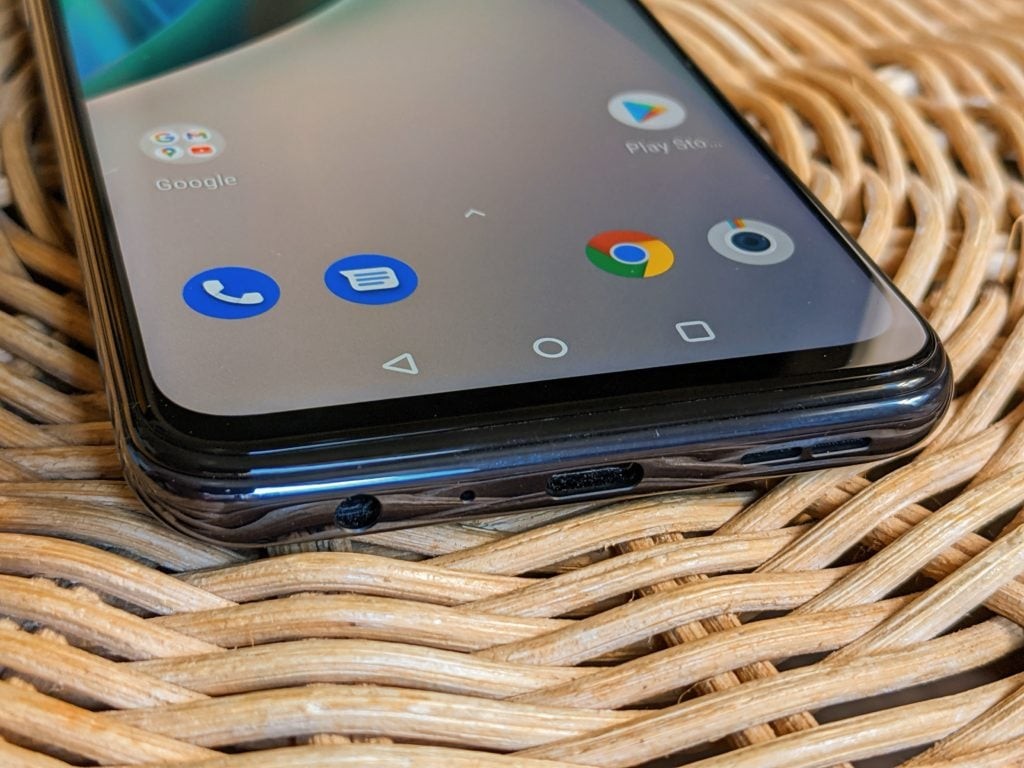 It also didn’t wow me. The N10 5G is competently fast, but not OMG-this-is-amazing fast. Obviously, that’s understandable. The Snapdragon 690 is no slouch, but it’s also no Snapdragon 765G. While the N10 5G is probably quick enough for most people (other than hard-core gamers), it doesn’t feel quite as special as other OnePlus handsets. It doesn’t deliver that extra oomph. And honestly, that’s a shame.

Battery life is fantastic, though. This phone will easily last two days of normal use on a full charge, and over a day if you hammer on it — not too shabby for a 4300mAh cell. I guess the Snapdragon 690 is also pretty efficient. And when it’s time for a refill, the N10 5G supports 30W fast charging, like every recent OnePlus phone. Warp Charge 30T (as it’s called) can deliver a 70% charge in just 30 minutes.

The N10 5G runs OxygenOS 10.5 on top of Android 10 — just like the Nord. I’m a little surprised OnePlus didn’t ship this handset with OxygenOS 11 / Android 11 out of the box, considering the OnePlus 8T launched with it. Regardless, OxygenOS is as lovely as ever here — clean, smooth, and super polished. It’s an absolute joy to use, and definitely conveys that unique and delightful OnePlus experience. 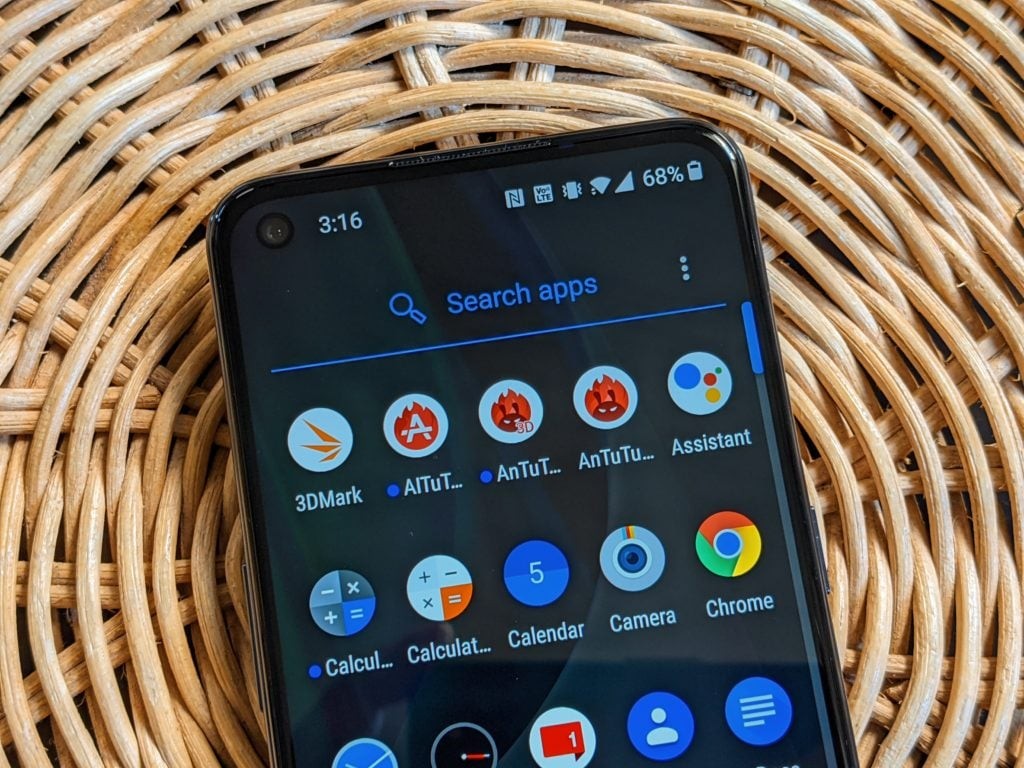 There are two ways to look at the OnePlus Nord N10 5G. In the overall smartphone landscape, this is a decent, affordable 5G mid-ranger with competitive specs. The 90Hz screen is beautiful, audio performance is excellent, and battery life is truly impressive. And thanks to OxygenOS, the N10 5G delivers a great user experience. Basically, the cheap-ish plastic build and middling shooters are the only weak points.

But here’s another perspective. The N10 5G is a OnePlus handset. It’s supposed to be something special, something that lives up to the company’s “Never Settle” tagline by combining speedy performance and outstanding value. But it’s not. It just makes too many compromises and leaves out too many important details (like the alert slider) to really hit the spot. And frankly, that’s disappointing. I was expecting more.

While US pricing is still unknown, €349 ($415) seems high for the N10 5G. At €399, the original Nord is a vastly better phone that delivers on that OnePlus slogan for just €50 more. Plus, the competition isn’t standing still — check out the $400 TCL 10 5G UW here in the US. Ultimately, the only thing that makes the N10 5G different from other handsets in this price range is OxygenOS. Is that enough? I don’t think so.