The OnePlus 8T is a highly capable 5G phone that’s wonderful to use. But $749 is a lot of money in these difficult economic times, and the competition is catching up. OnePlus needs to do better if it wants to remain the value leader.

OnePlus is having an interesting year so far. In April, it launched the OnePlus 8-series, and while I was impressed with the $899 OnePlus 8 Pro (which became my day-to-day phone), the $699 OnePlus 8 made a few too many compromises — especially in the camera department — to really hit the spot. And for a company built on selling affordable handsets, the 8-series’ lofty pricing was a head-scratcher.

In July, this was rectified with the OnePlus Nord, a phone offering superb value. While it didn’t come to North America, OnePlus is rumored to be working on a different, more affordable version of the Nord for the US market, so stay tuned. Which brings us to the $749 OnePlus 8T, the successor to the OnePlus 8. I just spent several days with the company’s latest offering, and here’s my takeaway.

The OnePlus 8T is a mildly updated successor to the OnePlus 8. It packs a better screen (flat vs. curved edges, a 120Hz refresh rate vs. 90Hz), better macro shooter (5MP resolution vs. 2MP), bigger battery (4500mAh capacity vs. 4300mAh), and faster charging (65W vs. 30W). Everything else is pretty much the same. The 8T is also the first OnePlus handset to run OxygenOS 11 (built on Android 11) out of the box. 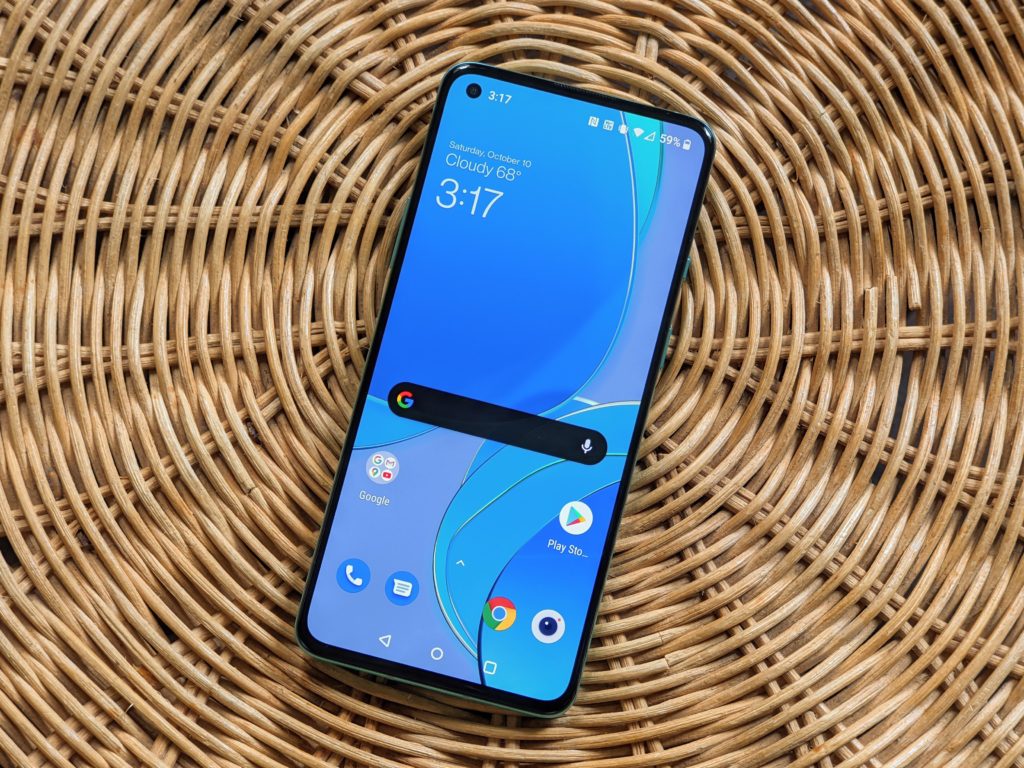 Besides the four shooters, this pod also contains a dual LED flash, and a flicker sensor. The main camera uses the same excellent Sony IMX 586 48MP Quad-Bayer sensor as the OnePlus 8 and OnePlus 7T, and the ultrawide is similar as well. Besides this new rectangular bump, the 8T’s design is typical OnePlus, and includes special welcome touches like the company’s signature notification slider.

The OnePlus 8T is a glass and aluminum sandwich, and comes in two colors: Aquamarine Green (like my review unit) and Lunar Silver. At 160.7 x 74.1 x 8.4mm and 188g, it’s about the same size and weight as the OnePlus 8 and OnePlus 7T. While the unlocked version doesn’t have an official water resistance rating, T-Mobile’s model is IP68 certified. The 8T also lacks a headphone jack and wireless charging. 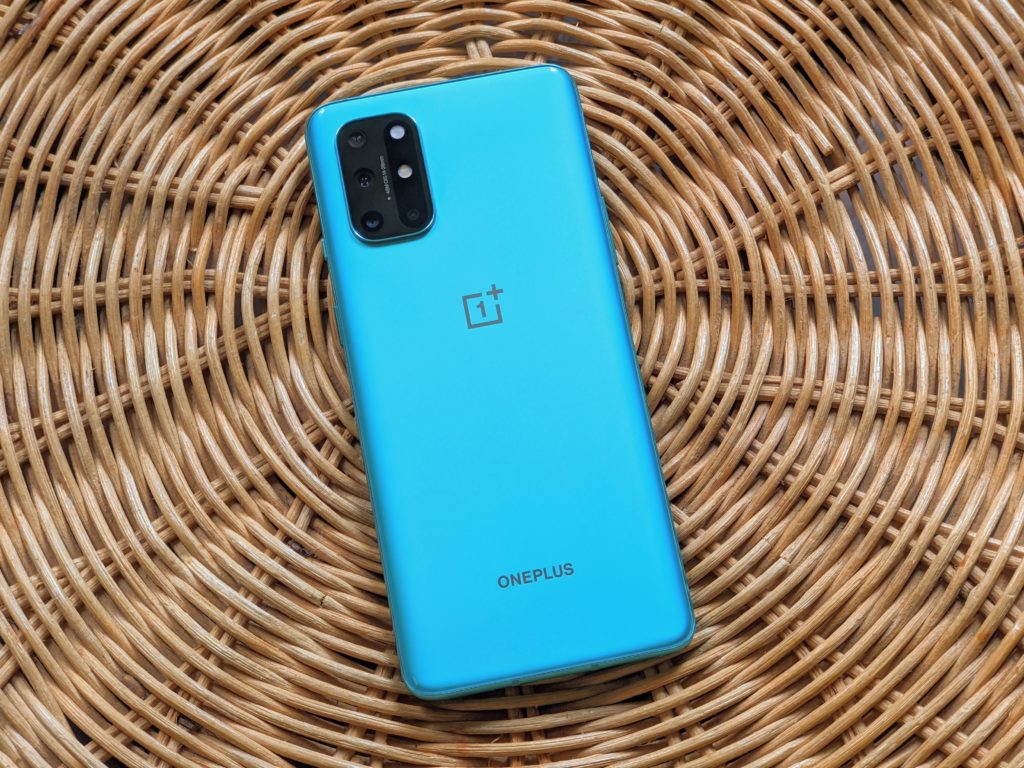 As for the other specs, there are stereo speakers, an optical in-display fingerprint sensor, and the standard complement of radios (LTE, WiFi 6, Bluetooth 5.1 LE, NFC, A-GPS / GLONASS / Galileo / Beidou). Of course, since this is a 5G device, it also supports several sub-6GHz 5G bands, including n5 (850MHz) for AT&T, plus n71 (600MHz) and n41 (2.5GHz) for T-Mobile. There’s no mmWave 5G compatibility for Verizon.

So specs are one thing, but what’s the OnePlus 8T like to use? Design-wise, it’s somewhat generic, but it looks modern and feels great in hand. There’s no mistaking the 8T for anything but a OnePlus phone — that lustrous Aquamarine Green color is perfectly on brand and absolutely fabulous. I also like the 8T’s size. While it’s a large handset, it’s not unwieldy. It’s definitely more comfortable than my big OnePlus 8 Pro.

Besides the annoying curved edges, I didn’t think the OnePlus 8’s display needed improvement. Apparently, I was mistaken. Not only is the 8T’s screen completely flat, but it now offers an even higher refresh rate (120Hz vs. 90Hz), which makes scrolling even smoother. This AMOLED panel is gorgeous. Colors are punchy, blacks are deep, viewing angles are fantastic, and with 1100nits (peak) on tap, it’s super bright.

On the camera front, the 8T doesn’t innovate much. Compared to the OnePlus 8, the main sensor is identical, the ultrawide is slightly wider (123-degrees vs. 116), and the macro is higher resolution (5MP vs. 2MP). Unfortunately, that macro still lacks AF and video recording, making it pretty useless. Oh, and there’s now a fourth 2MP shooter for lens count dynamic range (to improve monochrome shots, apparently?)

While the 8T takes decent photos and videos, I was expecting more at this price. There’s certainly nothing wrong with Sony’s IMX 586, but OnePlus could have upgraded the main sensor to Sony’s IMX 689 from the 8 Pro. Also, why not ditch that crappy 5MP macro for a proper 2x or 3x telephoto with OIS and fit the ultrawide with AF to double as a macro lens? That’s exactly how the OnePlus 7T cameras are set up.

At least the 8T adds a couple new imaging features that are worth mentioning: Video Nightscape (a night mode for video) and Video Portrait (a portrait mode for video). I believe these seriously raise the bar. The rest of the shooting modes are familiar, and make for a solid imaging experience. I think most folks will be happy with the 8T’s shooters —  lack of telephoto notwithstanding.

The stereo speakers sound loud and clear, and while there’s no headphone jack, the 8T supports both analog and digital audio devices over USB Type-C. As a bonus, the built-in DAC and headphone amp delivers clean sound, and the 8T supports both aptX HD and LDAC lossless audio over Bluetooth. The 8T also does a good job with haptics, thanks to a high-quality linear motor — I only wish the vibrations were a bit stronger. 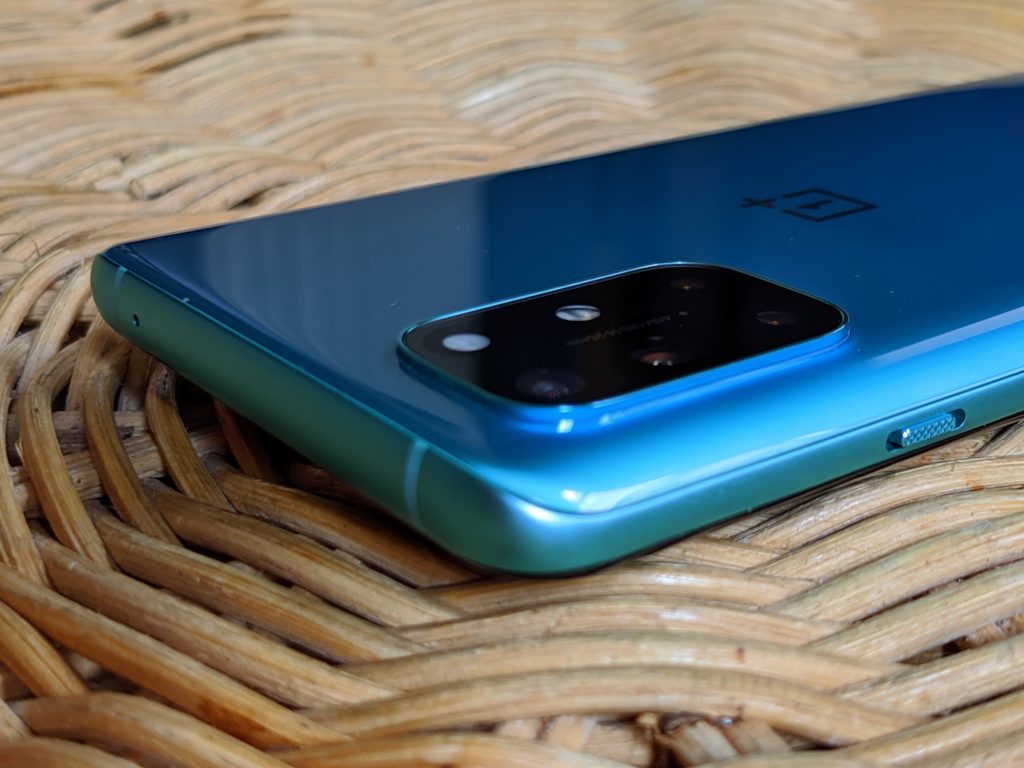 Performance is stellar, as you’d expect. Between OnePlus’ highly optimized OxygenOS, the ultra speedy Snapdragon 865, and that incredibly smooth 120Hz refresh rate, the 8T feels telepathically quick. Then again, so does the OnePlus 8. If you want to juggle dozens of apps simultaneously or play the most intense games without skipping a beat, this is your phone. Go ahead, knock yourself out.

Battery life is very respectable. The 4500mAh battery has no trouble keeping up with a busy day. I’ve even managed to get two days of moderate use on a single charge. But it’s filling back up that’s truly spectacular. OnePlus’ 65W fast charging is no joke — even just 10 minutes plugged can net you a 25% charge. And while there’s no wireless charging, the 8T also supports 27W USB PD charging. 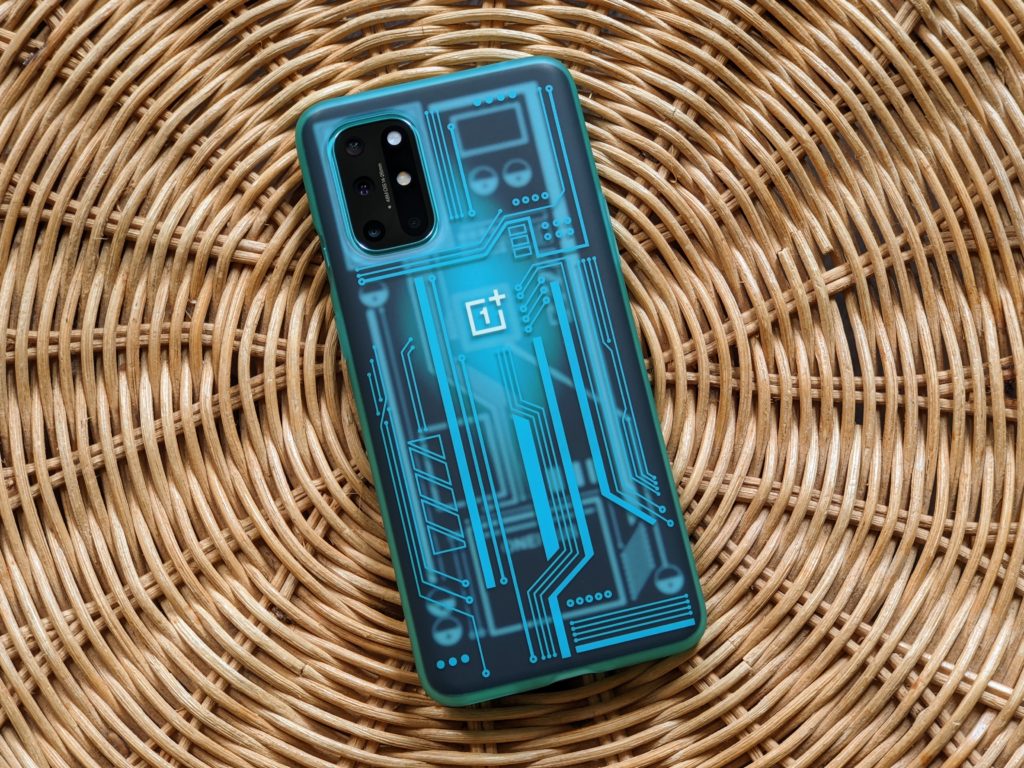 The 8T’s charger can even power other USB PD devices (like a tablet or laptop) at up to 45W — neat. Also, the optical in-display fingerprint sensor is one of the best I’ve ever tested. What’s less cool is that while 5G low-band n5 (850MHz) for AT&T is listed in the specs, the 8T only works on AT&T’s 4G LTE network. And without mmWave 5G for Verizon, this handset only supports T-Mobile’s sub-6GHz 5G network in the US.

OxygenOS 11 is really slick. It’s even more polished and quicker than before, but still remains close to stock Android 11 — which is a relief as OnePlus was rumored to be making significant changes. The new design reminds me a little of Samsung’s One UI. While I’m not a big fan of the default red and white color scheme, it’s easy to change. More exciting though, is that OxygenOS 11 finally includes a proper always-on display. 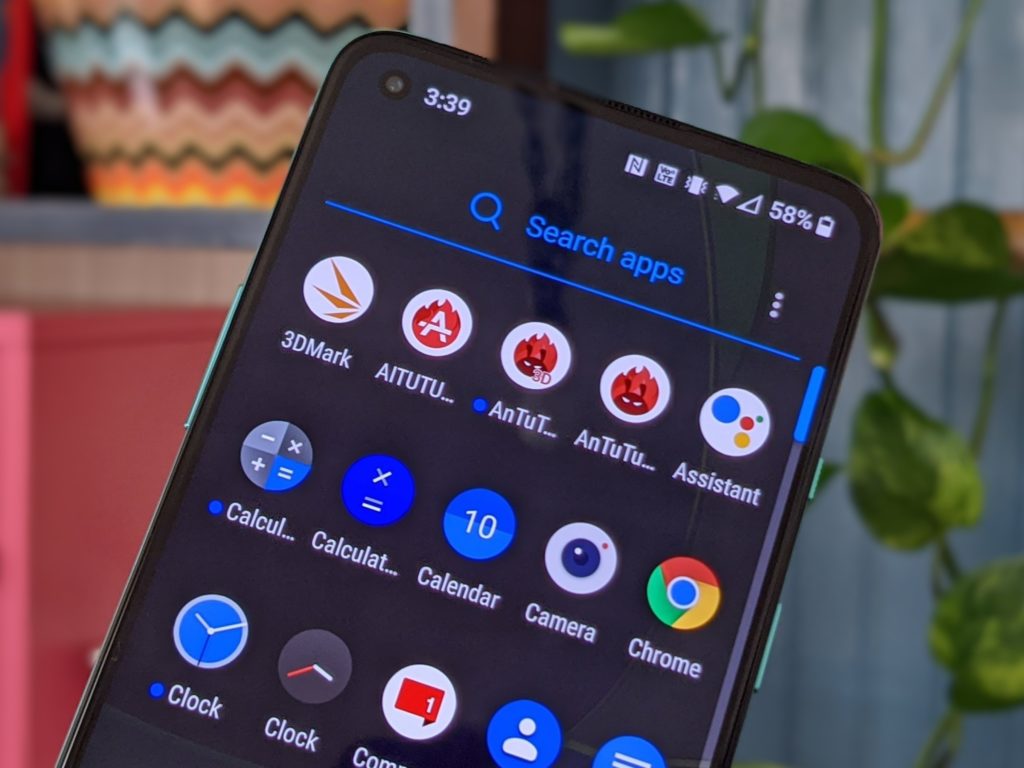 There’s no doubt the OnePlus 8T is a highly capable 5G phone. It offers a beautiful 120Hz screen, nice main shooter, excellent stereo speakers, gobs of performance, decent battery life, and a truly delightful user experience — all wrapped in a lovely shell. But for $749 I expected more, especially in crazy 2020. Where’s the telephoto camera, the wireless charging, and the Snapdragon 865+? I just know OnePlus can do better than this.

Even with the extra base RAM and storage, it’s hard to recommend the 8T when the mostly identical OnePlus 8 now sells for just $599, and the clearly superior OnePlus 8 Pro only costs $799. Is a flat 120Hz display, marginally better macro, slightly larger battery, and faster 65W charging worth it? Then there’s Samsung’s Galaxy S20 FE, which is similar to the 8T, but also offers a telephoto and wireless charging for just $700.

It’s particularly disappointing to see OnePlus stumble on the 8T’s pricing when it recently delivered the OnePlus Nord, an outstanding premium mid-range handset that’s basically a OnePlus 8 with a Snapdragon 765G for just €399. While OnePlus can’t change the 8T’s core specs, it can tweak the price tag. Let’s just hope the OnePlus 8T gets discounted soon, or the more affordable 8/128GB model makes it to the US.

I love the OnePlus 8 Pro, but I’ve never been crazy about phones with curved edge displays, and that has made me prefer the flat-edged display on the OnePlus Nord. OnePlus must have been listening because the OnePlus 8T is just what the doctor ordered – it pretty much brings together the best of both worlds from these 2 phones.

To that effect, the flat-edged display on the 8T is brilliant – with accurate colors and it’s super bright. Performance on the 8T is great, so I’m not fussed by the fact that OnePlus didn’t include an 865+ chipset. I’m also enjoying the new OxygenOS 11 with its noticeably cleaner and more refined UI.

My biggest gripes with the OnePlus 8T is its good-but-not-great camera, and the fact that its pricing is too high to be competitive these days. That said, while the OnePlus 8T isn’t perfect, it has proven to be yet another great device from OnePlus. But it would be even more compelling if it cost $100 to $200 less.

Update 10/26/20: After having spent more time with the OnePlus 8T, the camera has really grown on me. While it’s still no match for the likes of the iPhone 12 and most other flagship cameras, it has consistently produced dynamic photos that pop with vibrant colors and have a DSLR-like finish going for them. Its macro lens is also a lot of fun to use and helps the device stand out from the competition. As a result, the review score is being bumped up to 4.3.

Get breaking news, the latest reviews, and giveaways