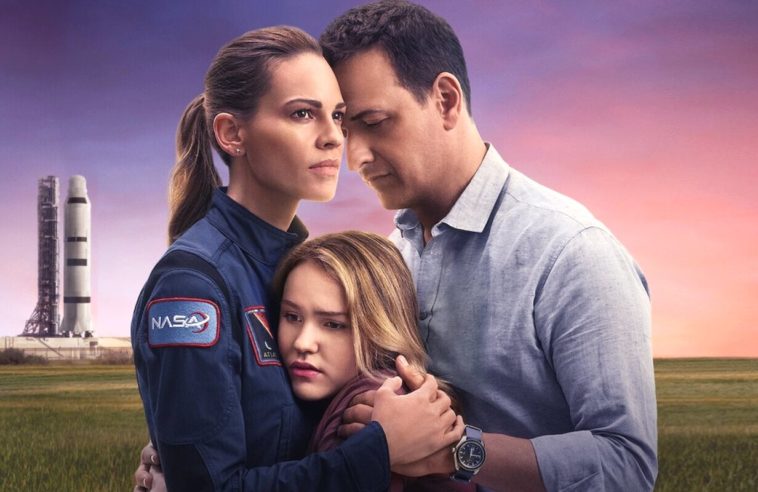 Based solely on the talent involved, it was clear that Netflix had high hopes for their latest venture into original sci-fi. Away is based on an article that was originally published in Esquire in December 2014 that told the story of astronaut Scott Kelly, who was in the midst of a lengthy mission aboard the International Space Station when he received the tragic news that his sister-in-law had been murdered.

Showrunner Andrew Hinderaker got his start in television as a staff writer on Penny Dreadful, but there were some big names behind the scenes backing his first project as the main creative driving force. Executive producers include Planet of the Apes and The Batman’s Matt Reeves, Academy Award winning filmmaker and director of Glory and The Last Samurai Edward Zwick, along with Friday Night Lights creator Jason Katims.

Away also scored a major coup by signing up Hilary Swank to lead the cast as Emma Green, marking a rare foray into the world of scripted television for the two-time Academy Award and Golden Globe winning actress, which at the very least guaranteed a strong central performance.

The first season was officially announced in June 2018, with ten episodes being ordered, while the cast was filled out the following summer with the additions of Josh Charles, Talitha Bateman, Ato Essandoh, Mark Ivanir, Ray Panthaki and Vivian Wu.

Shooting kicked off in August of 2019 and ran for seven months, which sounds lengthy for a ten-episode TV show, but given the nature of Away it was hardly surprising that things ran on for a little longer given the various practical and visual effects required.

The story follows the first manned expedition to Mars in human history, with an international crew all cooped up together. The disparate cast of characters hail from all walks of life including a chemist, botanist, medical officer and two veteran astronauts. Lead character Emma Green’s husband is more than experienced when it comes to heading into outer space, but a medical condition ruled him out of the running for the mission, leaving him at home to care for their teenage daughter.

As is the case with any movie or TV show set in cramped conditions, the interpersonal dynamics among the crew are one of the driving forces behind Away’s narrative, while levels of suspicion and distrust also begin to seep in as the mission progresses.

Reviews were generally solid with the emotional through-line and performances coming in for widespread praise, despite the series regularly falling into cliche. Away was also a regular fixture in Netflix’s Top 10 most-watched list for a number of weeks after it first aired, and had even been rumored for a speedy renewal, which made it all the more surprising when it was announced that the big budget sci-fi had become the latest in a long line of Netflix original shows to be canceled in 2020 after just one season.