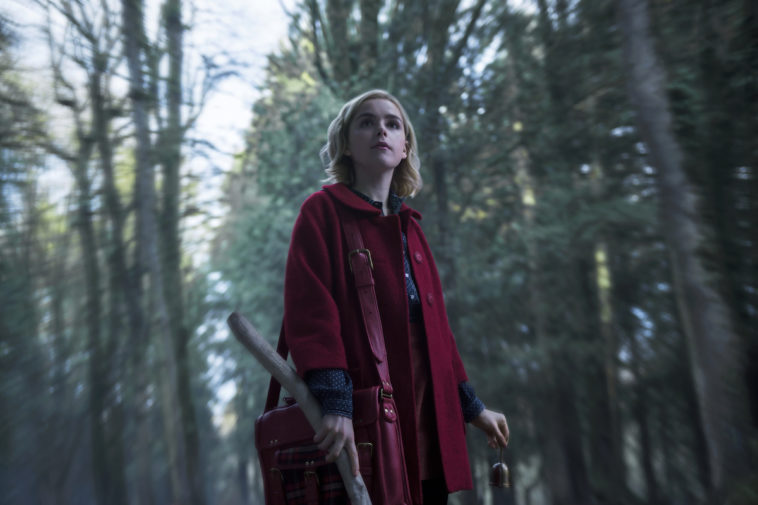 Newly released promo pictures from Netflix’s Chilling Adventures of Sabrina have fans giddy with anticipation as the series premiere draws closer. These new images shed light on the direction in which the creative team behind the latest Sabrina adaption will take us.

Since the onset of the project, many were excited to hear that Kiernan Shipka would be playing the lead role in the upcoming series. The promo images prominently feature the young actress as the obvious focal point. In one photo Sabrina is set in a heavily wooded scene wearing a red overcoat as she stoically poses while holding a fairly large stick in her right hand and what appears to be a bell in the left.

In the other picture, which some have described as a ‘baptism’, the teenage witch is dawned in – what appears to be – a silk gown as she kneels before the leader of the ceremony. She’s surrounded by a group of ominous looking figures including Baphomet and other individuals you won’t want to come across in a dark alley – or anywhere else for that matter. Zelda and Hilda also make a cameo in this image.

Both pictures feature a blurry background that adds even more gloom to overall menacing nature of the images. Some have implied that Netflix may be taking cues from The CW – the network that originally developed the show as a Riverdale expansion before the online streaming giant got involved.

The CW has made a name for itself in recent years as they’ve found success developing darker shows – in terms of both the plot and the actual color palette of the series. The Nerdist is suggesting that Netflix’s upcoming show is, indeed, much darker than anything else they currently offer. Said tricks are well known in Hollywood for the dramatic emotion they provoke as compared to other coloration techniques.

Fans still have a few more months to go before the October 26th premiere. If history tells us anything, you can be sure that Netflix will continue to drop new hints to further entice viewers between now and then.