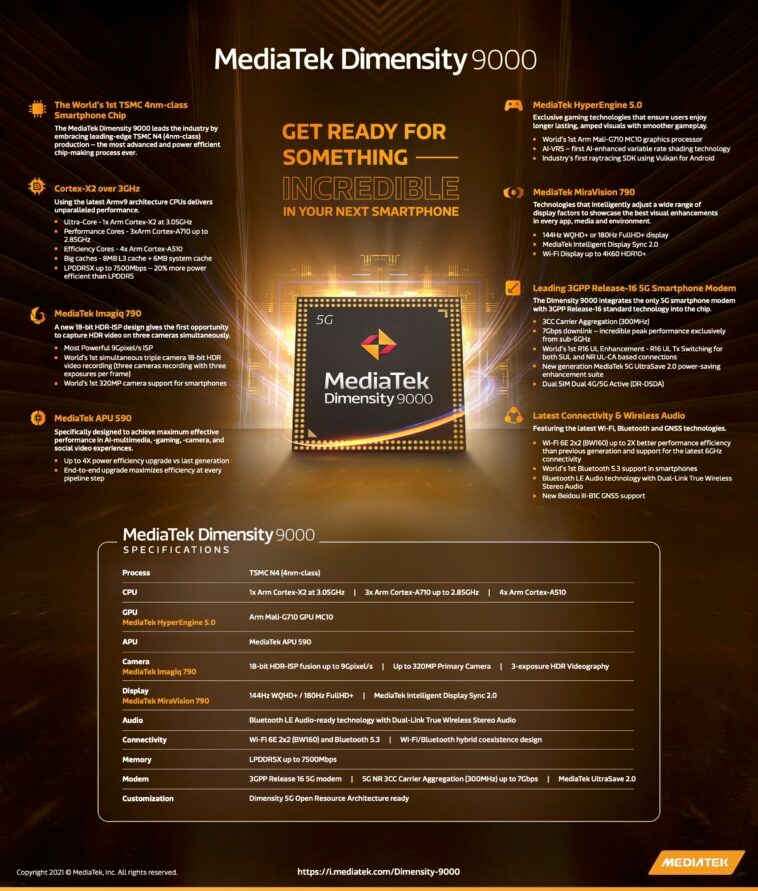 A new flagship chip has just been announced by MediaTek. Adding to its line of Dinmensity chips, the Dinmenisty 9000 5G comes in as the world’s first smartphone chip built on ultra-efficient TMSC N4 (4nm-class) production process. This brings improvements in performance, gaming, imaging, multimedia, and connectivity.

Working alongside an Armv9 CPU architecture, the Dimensity 9000 5G three performance A710 cores (up to 2.8Ghz), four efficiency Cortex-A510 cores, and one ultra Cortex-X2 core (up to 3.0Ghz).

MediaTek also packs the world’s first Arm Mali-G710 GPU for smartphones. It also offers the fifth generation HyperEngine 5.0 with AI-acceleration to further improve graphics and to speed up gameplay performance. It’s also, according to MediaTek, more power-efficient than ever.

The chip also aims to improve 5G experience with the integrated modem that’s able to reach speeds of up to 7Gbps downlink. It also offers 5G/4G dual SIM support and the new MediaTek Ultra Save 2.0 for power-saving efficiency.

MediaTek also announces that certain manufacturers are also set to equip their next offerings with the Dimensity 9000. Some brands mentioned include OPPO, Xiaomi, and more.

Smartphones powered by MediaTek’s latest chip are expected to arrive by the first quarter of 2022.