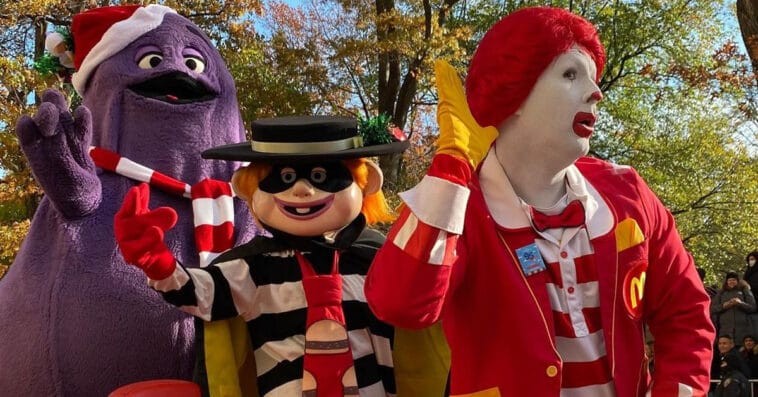 Two of the most beloved McDonald’s characters have made a surprising comeback at 2021 Macy’s Thanksgiving Parade after several years of being absent from the highly anticipated annual procession.

Grimace and Hamburglar joined Ronald McDonald at this year’s parade, bringing smiles and laughter to audiences on the streets and to those who were watching the festive event from the comfort of their homes. Seeing Grimace and Hamburglar again after a long time made a lot of fans realize how much they missed the two characters. Some of them even took to Twitter to share how they reacted when they spotted the mascots at the parade.

I glad they actually brought back Grimace and the Hamburglar alongside with Ronald McDonald during the Macy’s Thanksgiving Day Parade and I am deeply impressed that they succeed it within the continuity therefore pic.twitter.com/HXbNJTp4D3

You’re damn right I said “HOLY SHIT!” out loud when I saw this. HE’S BACK! https://t.co/FXEAoZGf3i

best part of thanksgiving was grimace in the macy’s parade:,) pic.twitter.com/Iae7fZeUvf

i screamed as if grimace was a real celeb and my mom made fun of me saying “this is like when the beatles were on the ed sullivan show and people took photos of the tv” they ARE my beatles pic.twitter.com/6trtAUslRz

Aside from stirring up all kinds of nostalgia, Grimace and Hamburglar’s return also inspired some new memes and jokes.

Hamburglar was lured to the #MacysParade in an elaborate sting operation.

Additionally, Grimace and Hamburglar’s reappearance made some fans appreciate McDonald’s even more for sticking with its decades-old characters despite their questionable looks and unclear origin stories.

I watched the parade and thought to myself;

Not to mention Grimace; a husky purple piece of blubber representing a fast food chain that had documentaries made about their unhealthy food

Here I am 40 years later still waiting on @McDonalds to provide me the backstory to The Hamburgler and Grimace.

Grimace and Hamburglar have both appeared in several TV and print ads for McDonald’s since 1971. Grimace was originally introduced as the “Evil Grimace,” a villainous character with two pairs of arms that he used to steal milkshakes. After that first marketing campaign, the character was revised to be one of the “good guys,” and his number of arms was reduced by two.

Like Grimace, Hamburglar also started out as a villain. As his name implies, Hamburglar was fond of stealing hamburgers. Even though he always attempted (and failed) to hoard all hamburgers for himself, he had always been looked upon as a valued member of the McDonaldland community. In 1985, the burger-loving character was revised to be someone who loved playing tricks on his friends.