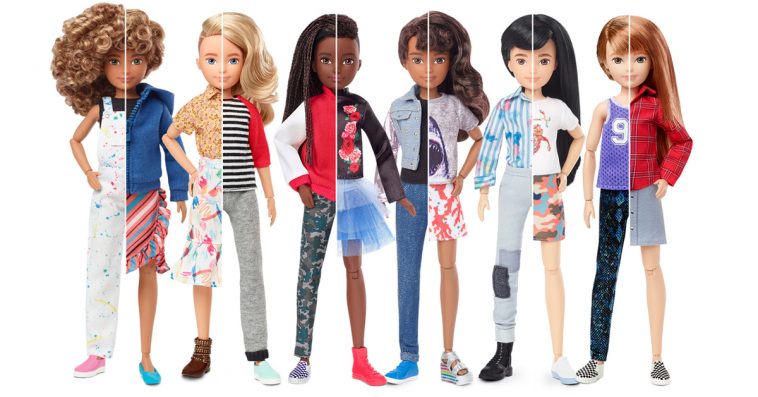 For decades, Mattel helped define gender norms with Barbie and Ken. But now the toy manufacturer is defying them with its first-ever gender-neutral doll line called Creatable World.

Launched on Wednesday, Creatable World consists of six fully gender-neutral dolls with different skin tones that can be accessorized to be a boy, a girl, neither or both. Each doll comes with a kit that includes two hairstyle options and various clothing items like skirts, jeans, hoodies, shirts, sneakers, and heels for endless styling possibilities.

In our world, dolls are as limitless as the kids who play with them. Introducing @CreatableWorld, a doll line designed to keep labels out and invite everyone in. #AllWelcome

“Toys are a reflection of culture and as the world continues to celebrate the positive impact of inclusivity, we felt it was time to create a doll line free of labels,” Kim Culmone, senior vice president of Mattel Fashion Doll Design, said in a statement. “Through research, we heard that kids don’t want their toys dictated by gender norms. This line allows all kids to express themselves freely which is why it resonates so strongly with them. We’re hopeful Creatable World will encourage people to think more broadly about how all kids can benefit from doll play.”

Roughly two years in the making, Creatable World came to life after Mattel conducted a 250-family research participated by experts, physicians, parents, and kids, which confirmed that culture at large is moving toward gender neutrality.

A ? without labels means everyone is invited to play. Welcome to @CreatableWorld, where we let toys be toys so kids can be kids. #AllWelcome

“We never talked to a kid who didn’t flip from joy when they saw the doll,” shared Monica Dreger, vice president of Mattel Global Consumer Insights. “[The doll] was relatable and self-expressive. Kids saw an open canvas and felt they were in charge of their play.”

Dreger added that trans and gender-fluid kids told researchers that they could see themselves in the dolls, while cisgender kids said the dolls reminded them of their friends.

? by day and ?by night. With ? + looks all in one kit, kids can create their own characters again and again. #CreatableWorld #AllWelcome

While the dolls were received favorably by kids in general, Dreger admitted that not all of the parents in the research pool were as receptive as their children. “Many parents saw the doll for what it was, and a lot of parents do feel there’s a need for the gender-neutral toy,” Dreger said. “[But] the confusion lies before some parents saw the doll. A lot of parents had a hard time and confused identity and sexuality — and felt they had to explain it to their kids.”

Social stigma also influences what the adults think about the dolls. According to Dreger, some “parents said, ‘I think this is cool, and I like the idea, but what will my neighbors think?’”

While it’s expected that some people will see the Creatable World toy line as a political statement, Mattel believes that it created the gender-neutral dolls at the right time.

“It shows me that we’re exactly where we need to be. If there was no pushback to something that right now is a hot topic means we’re either not authentic, or we’re too late,” Dreger said. “The kids are behind it. We know we’re on time for them.”

Mattel’s Creatable World dolls are now available on Target, Amazon, and Walmart for $30 per kit.