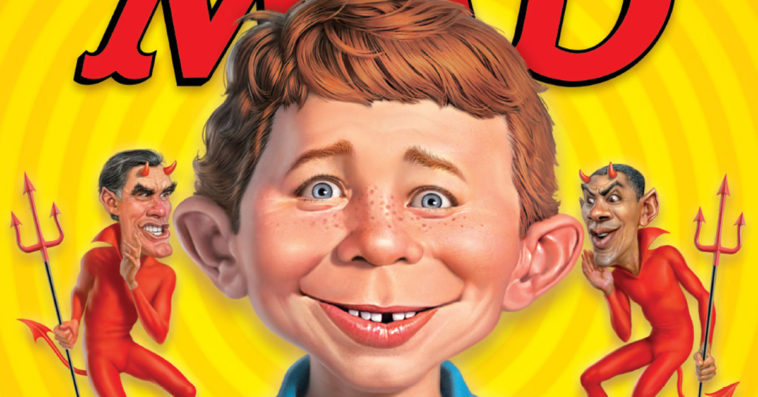 Despite reports that it is ceasing publication, Mad magazine is not completely disappearing.  The satirical magazine, however, is no longer going to be the force that it once was.

Mad magazine will stop publishing new content after issue #10, and all new issues after that will feature previously released content, wrapped with new cover art. It will also be leaving the newsstand after issue #9, which will be released in early August. Starting with issue #10, the magazine will only be available via direct market comic book retailers and subscriptions.

“After issue #10 this fall there will no longer be new content — except for the end of year specials which will always be new. So starting with issue #11, the magazine will feature classic, best of and nostalgic content from the last 67 years,” DC, which publishes the magazine, said in a statement to ABC News.

Launched as a comic book in 1952 before becoming a magazine in 1955, Mad magazine publishes satire on all aspects of life and popular culture, politics, entertainment, and public figures. The magazine’s playful cover typically depicts its mascot, Alfred E. Neuman, with his face often replacing that of a celebrity or character who is featured in the issue.

Mad magazine hit a peak of more than 2 million subscribers in the early ‘70s, when it remarkably made fun of changing shifting social mores and cultural attitudes. Sadly, the magazine has begun to lose its readers since satire content has earned audience in other forms of media.

“It’s smart satire and irreverent and self-deprecating humor spawned entire generations of humorists who brought those sensibilities to books, film, TV and eventually the Internet,” veteran Mad artist Tom Richmond told The Washington Post of how Mad magazine became a victim of its own influential success. “New generations then received their satirical influences from these new-media stars, not knowing where the source came from. Even up until the end, Mad was doing sharp satirical work, but ultimately audiences were elsewhere.”

Richmond added that he wasn’t really surprised by the news. “Of course we all knew this was coming,” he wrote on his blog. “Last week, DC laid off one art director and three of the four remaining editors. Not too many magazines can keep publishing without any staff.”

Meanwhile, legendary Mad cartoonist Sergio Aragonés thinks that Mad magazine has just been hit by old age. “Age hits everybody: It hits magazines, it hits the movies, it hits technology,” Aragonés told The Washington Post. “It’s been a logical development.”

Though Mad magazine is not going anywhere, news that it will no longer publish new content has saddened fans and former members of its editorial staff. See some of their tweets about the news below:

I am profoundly sad to hear that after 67 years, MAD Magazine is ceasing publication. I can’t begin to describe the impact it had on me as a young kid – it’s pretty much the reason I turned out weird. Goodbye to one of the all-time greatest American institutions. #ThanksMAD pic.twitter.com/01Ya4htdSR

Hard to imagine a world without @MADmagazine– My older brother's collection helped me learn to read. It taught a generation how to question & mock the status-quo. An honor & a career highlight to be ridiculed mercilessly by that "usual gang of idiots" ❤️You Madly, Lube Skystalker pic.twitter.com/GvKpQszL7A

So sad. My kids still love @MADmagazine. And I know everything I know about the Towering Inferno from it aka #thetoweringsterno. https://t.co/fBeN4O4UnD

I was an intern at MAD Magazine in 1994. I had no apt in NY so I kept my belongings in the archives & took a daypack & crashed on couches for 3 months.
In the writers room they had a drum kit to do rim shots on bad jokes. Great memories. I’ll miss it https://t.co/xGjrTeefXI

RIP Mad Magazine. Truly a sad day. We need it now more than ever! pic.twitter.com/uh8i1Dttz2

I hope people can understand what this means to us a nation; both as a culture and as a functioning critical society.

MAD wasn’t JUST a humor magazine. It’s not just the end of an era; it’s the end of… https://t.co/hwyhuZUt6X